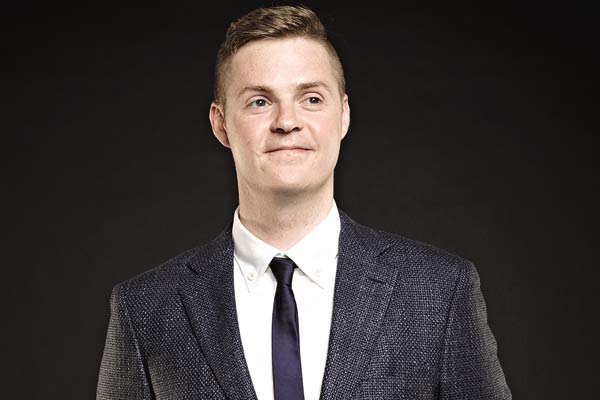 Roars of laughter are sure to be heard from miles around as some of the best-loved queer comedians from Australia and abroad take to the stage for an evening of hilarity at the Mardi Gras ‘Laugh Out Proud’ variety show.

Australia’s favourite boomer-provoking comedian, Tom Ballard, is among the show’s impressive line-up which features performers from all over the LGBTQIA+ community such as Cassie Workman, Demi Lardner, Rhys Nicholson and Nath Valvo.

'Laugh Out Proud' exclusively featuring queer comedians is something which Tom describes as “remarkable” and reflects the changing attitudes of society towards the LGBTQIA+ community.

“Ever since I got into comedy in 2009, it’s kind of insane how, and queer people have obviously always been funny, but over the past ten years it’s just hit an explosion,” Tom says. “Some of the best comics in the whole country and indeed the world, have been queer people of some stripe or another. I love my queer brothers and sisters. I think it’s going to be a great show. It’s Mardi Gras for god’s sake!”

This isn’t Tom’s first time at Mardi Gras, having performed as part of Trevor Ashley’s ‘Mardi Gala’ show at the Sydney Opera House in 2019 which he feels was “really tapping into something” and that the show “made a lot of millennials and Gen X-ers very angry about those god damn boomers!”

This year however, Tom says he’s ready to find some new things to yell about, and that over the years, his comedy style has evolved more into social commentary.

“I ran out of stories from my life. I did shows about personal things. . . And eventually my material just sort of caught up to me,” Tom explains. “So I started wanting to talk about things and I was more interested in politics, kind of being a bit more social commentary and political commentary.”

“That was something that I came upon and it’s something I’m quite passionate about, trying to make that stuff really funny, you know, as funny as stories about dating or about airline food or whatever…

“That’s what I’ve been trying to go for over the past couple of years, sometimes failing, sometimes succeeding but always charging money.”

Tom explains that the secret to maintaining this style of comedy is tuning into “that sense of something being wrong and how ridiculous it is”.

“The world is insane and that’s quite funny.”

With his comedy style often focusing on quite serious subjects, Tom explains that there's a difference between writing a joke about something and thinking that the subject itself is funny.

“Some people think that if you talk about something in a comedy show that you think it’s a laughing matter or you think it’s not important, or you're trivialising it. I try as much as possible to talk about stuff that I think is really important. That’s the comedy I like doing now.”

Tom couldn’t be more excited for 'Laugh Out Proud'.

“I love Mardi Gras. It’s the best and the show’s going to be hilarious. We’re all queens of comedy!”