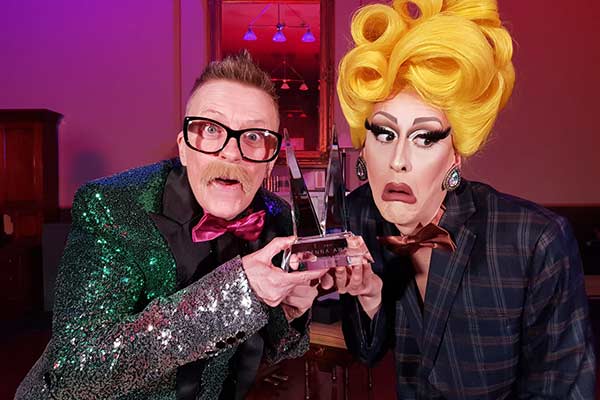 Over the past year, the online world crashed into our lives in a ubiquitous way, from Zoom meetings with our bosses to FaceTiming our friends who live a five-minute walk away.

The team at LaNCE TV is no stranger to being online, having streamed on Facebook since the inception of their programme in 2017. But it wasn’t until lockdown that they really amped up the creativity, earning themselves an Antenna Award (Community Television) for Outstanding Technical and Creative Ingenuity During Lockdown.

“Long before COVID came along, we’ve been using social media as a platform for engagement, performance, and collaboration,” Co-Host Lance DeBoyle says.

In February 2020, Lance and the team (including Co-Host Gabriella Labucci) started splitting the stream between Facebook and Channel 31, garnering a television audience in Melbourne. Lance admits they are not known for their technical capabilities, but he himself plowed through a steep learning curve in order to bring the show to life. From vision switching to lights to audio, as well as hosting the show and managing Channel 31 in an earpiece, Lance learned the ropes in different areas vital to film production in a way any film and media student would be jealous of.

LaNCE TV started as a project to bring more awareness to queer issues, with the LGBTQIA+ community sorely underrepresented in mainstream media. The team asked themselves how Facebook Live could be used for the powers of good, and six months in, they realised they were documenting stories – and people were trusting them with their lives.

A problem that rural queer communities face is the lack of community events—nights out, day gatherings, and even events based around sharing food, drink and stories.

"Nothing against heterosexual people – some of my best friends are heterosexual – but are they really supporting our community, or are they going, 'We've got a slow night, so you can have Wednesday night, because that adds to our sustainability'?,” Lance questions. “And when it doesn't work, they pull it."

“About six months in, it really started to dawn on us that we were documenting people’s stories and people were trusting us with parts of their lives. So we’ve become a safe space for people to do that.”

Topics the show has covered include faith, addiction, health complications, and a one-and-a-half hour panel for Transgender Day Of Remembrance, which included five trans guests and four meetings beforehand to finalise the content of the broadcast. Some guests get a six-month collaboration of five-or-so-minute segments to speak their truth and educate in an entertaining way. Every year, the team at LaNCE TV convenes to plan new content, new guests, and new perspectives.

If one award win is an achievement, a GLOBE Award nomination is another stripe on their waving flag. The sky is the limit for LaNCE TV, as they aim higher every day. SBS, in fact, is where Lance’s sights are set, and there’s no doubt they’ll get there one day.

However, the world isn’t just rainbows and smiles. LaNCE TV has received backlash in the past, and when this happened, the wider community rallied together to support them – Ballarat Mayor Daniel Moloney, who is openly bisexual, voiced his public support for LaNCE TV, showing that the small minority of detractors are just that: a small minority. After all, community, support and love will always win.

LaNCE TV Ballarat streams live on Channel 31 Melbourne and on Facebook at 9pm on Friday nights.