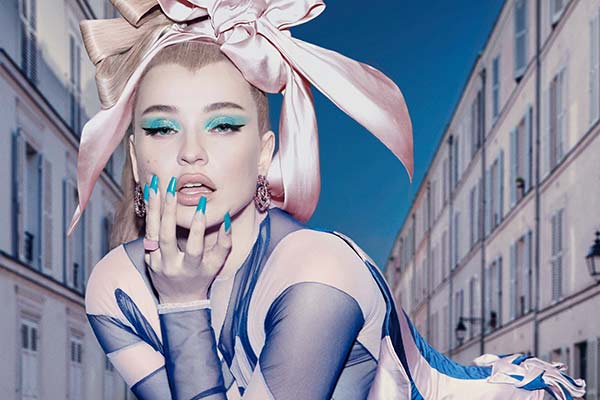 The video is a glossy, end-of-the-world dance party, inspired by the chaos of one chapter closing and a new one beginning. Sure, the world has changed, but that doesn’t mean we can’t still find hope and joy.

“The ‘Future Starts Now’ video is inspired by going into the unknown, having the world change and break under you, and celebrating that change and the future after what feels like the end of the world,” Kim says. “I was very into this amazing anime called Japan Sinks and, since I was so inspired by Europe when making my new music, I thought ‘There’s no better way to do this music video than to have the Eiffel Tower sink’.”

“When I think of Europe, the first thing I think about is the Eiffel Tower. It’s a metaphor for life: things are going to change whether you want them to or not and you can either roll with it and make the best out of it or let it drown you. The pandemic changed the world in bad ways but good ways too. It’s about not letting life sink you and to have fun and celebrate the world – whatever it becomes.”

Kim performed the song for the very first time recently at the 2021 MTV Video Music Awards, making her the first out transgender woman to ever take the VMAs stage. ‘Future Starts Now’ pulls inspiration from ‘80s-infused dance hits and European house music. Take this as a declaration of what’s to come from the artist – Kim’s upcoming debut album promises to be a shimmering, dance-pop escape.

‘Future Starts Now’ is out now.