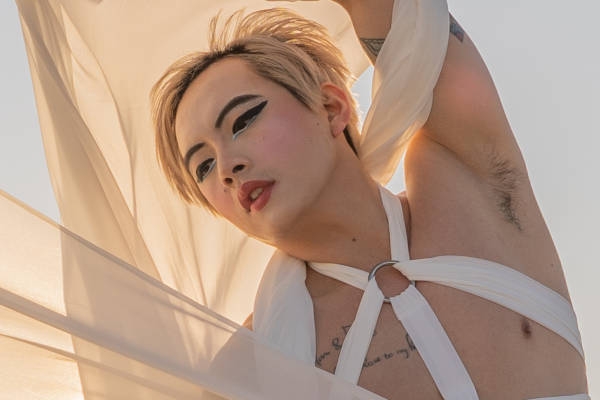 It has so far resulted in the singles 'Freedom' and 'Expiratory', the latter being shortlisted as a finalist for Diversity Arts Australia's 'I Am Not A Virus' campaign launched last month.

"One in five Chinese-Australians have been threatened or attacked in the last year and one in three have been called offensive names due to their Chinese heritage, according to the Lowy Institute," Tai says.

"From afar I see you take a breath in but I get close and watch you hold your breath in. I know I caught you off guard but you can breathe around me. Expiratory.”

Who is Dyan Tai... I'm a singer, songwriter, performance artist, DJ and event producer. I was classically trained in piano and only started writing and producing electronic pop music after moving to Sydney from Malaysia.

I sound like... My music is a fusion of electronic music and traditional Chinese instrumentation like guzheng and gongs. I have been told by people that my vocals remind them of Prince, while my songwriting can sometimes sound like FKA Twigs.

My first gig was... Singer-songwriter and open mic nights at dingy bars; often with hardly anyone paying attention.

In the studio I usually... Arrive with herbal tea. Warm herbal tea is essential for vocal sessions; and lots of warm-ups.

If I could tour with anyone... I would one day love to tour with these incredible local queer artists (all whom I really look up to): Brendan Maclean, Lupa J, Marcus Whale, Jamaica, Lavrence.

My favourite app at the moment is... AloMoves app. I'm an intermediate-advanced level yoga practitioner and I use it for my daily morning practice (for a quick half hour fix) in addition to doing studio classes.

Life as an artist can be... Very rewarding, but draining mentally and physically. Like most artists, I have a day job which makes it really challenging to maintain a healthy work-life balance while trying to write new music, gig, run and host events, produce social media content and DJ on the side.

However, the support from the queer community keeps me going and I have so much love for everyone who has showed up and supported me along the way.

The most scary scenario I've found myself in, was... When I was in costume and make-up after a gig and got harassed by a group of drunk people on my way home; but sadly, that's the reality for queer people.

One person you'd like to invite around for a dinner party... The 18-year-old version of myself who just moved to Sydney and just started to come out as a young, queer person. So I can tell him that he is beautiful inside and out no matter what people say (on dating apps) and that he does not need anyone's validation to succeed in life.

If we were coming over to your place, what would you cook us? I would make you a traditional Malaysian dish... nasi lemak!

Do you have any phobias? I am extremely terrified of heights. I can't do roller-coaster rides but now working on conquering my fear by doing aerial gymnastics.

Best local takeaway joint for a 2am feed that will leave you with a food coma?
Not in Australia, but the the best takeaway joints at 2am would be the street food in Malaysia where I grew up.

Where can we see you next? You can watch me on the 'Chinese Australian' episode of the new season of ABC's 'You Can't Ask That', which will premiere on 9 June, but the entire season is also available for free on the iView app.