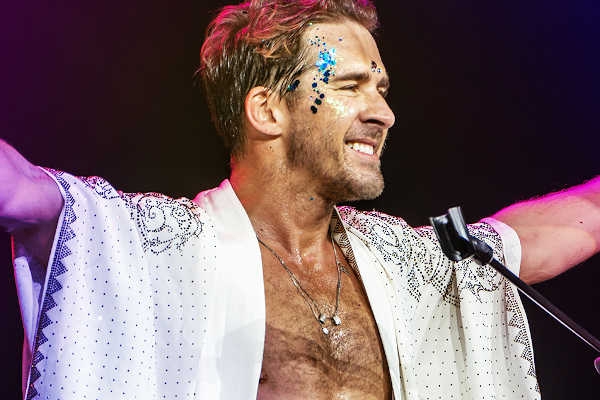 Hugh Sheridan Explains What It Means To Be 'HUGHMAN'

'I AM still a human (non binary/bi/me/Hughman) but I'm in a monogamous relationship with another human, who I love.'

As with all restraining bundles of complexity, contradictions and mystery in the specific journey from 'non binary/ bi/ me' to 'HUGHMAN' the show, what has Hugh Sheridan found it means to be human?

Is it raising the vibe with Whitney Houston, George Michael, Olivia Newton-John and Frank Sinatra from a stage of tap dancers? Or perhaps the raw soliloquy of an Australian theatrical actor coming out to a nation with a ruthless history towards queer people.

How we've answered that very question has driven the foundations of our civilisation, philosophy and culture.

For centuries, preachers, poets, politicians, philosophers, scientists and artists have sought the answer to the ultimate puzzle – never quite capturing the immensity of the human experience.

So how could Hugh Sheridan – Adelaide-born, former Australian ballet danseur and State Opera, VCA and NIDA alumni, four-times Logie winner (portraying the beloved Ben Rafter), actor, musician with a slew of TV, film and theatre shows to their name – hope to explain what it means to be a human being?

"Part of being human is the fact we change," Hugh muses. "One day, we're in lockdown and the next day we're not.

"We change and evolve as the world around us does. It's a human being's right to change. Labels are so definite. That's why I chose to come out as human. I want to show everyone has the right to define themselves. I don't know what tomorrow's going to bring, but I like where I'm headed."

Where Hugh is headed next is straight to Soutbank Piazza for Brisbane Festival 2021, introducing shows 'Hugh Sheridan Live' and 'HUGHMAN' to Queensland audiences for the first time.

"'Hugh Sheridan Live' is me telling Brisbane what it's like to be me," they reflect. "If people want to get an insight into who I really am, then that's the show for it. It's a raw tell-all. I intertwine songs I sang with my father [swing crooner, Denis Sheridan].

"I've worked as a singer with residencies from New York, Miami to LA. I get up on stage and allow myself to be vulnerable – sing songs from the heart and talk about past relationships and what a song meant to me.

"I did similar with Hugh Sheridan Unplugged at Adelaide Fringe Festival last year. But a lot has changed in my life since March last year. I'm not going to lie – it's been a shocking year."

Hugh has managed to dominate Australian headlines with a public marriage proposal from this year's Adelaide Fringe Festival, that revealing Instagram post and DNA Magazine cover amidst bouts of quarantine and the sensational cancellation of musical 'Hedwig and the Angry Inch' culminating in a vital mental-health check-in.

Certainly, there's plenty of fodder for speculation and judgement on whether this is a contrived one-sided narrative or a gripping show playing out in real life.

"'HUGHMAN' is my spirit," they disclose. "If I could put myself in colour, then it's 'HUGHMAN'. It's every bit of courage and defence I managed to grapple to build.

"'HUGHMAN''s message is the need to come together. Before anything, we're human. Before we're our gender, skin colour or religion. We feel the same. We hurt the same. We cry the same.

"We experience the same love and care for our parents or for our family. 'HUGHMAN' is a celebration of what I define myself as – human."

To be human is to be the centre of our universe as the greatest story ever told. Hugh Sheridan's journey – in all their glittery, dramatic extravagance – is one we collectively share: the resilience of the human spirit.

Being human celebrates the resilience of the human spirit in all its colours and possibility; and this is what Hugh Sheridan wants to celebrate with 'HUGHMAN' – the awe of being alive and the thrill of discovering humans, the greatest wonders in the world.

"I'm really excited to bring it to Brisbane. I want Brisbane to be entertained," Hugh declares. "It would be such a win for Brisbane to have a really successful festival.

"I want to lift the vibration, for people to feel good, to see amazing dances and listen to great music – and just have fun. Life is hard enough. We need to feel joy again."