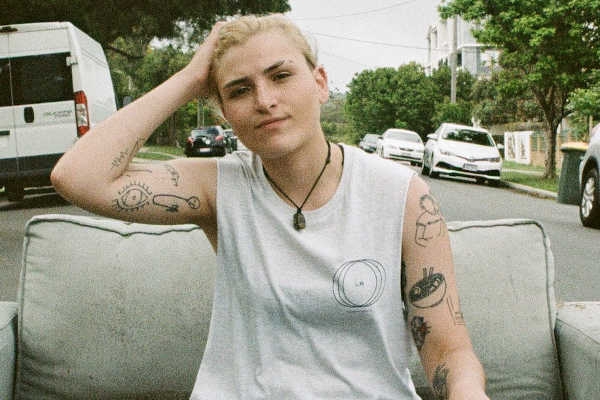 After all the losses undertaken by the music industry throughout 2020, people have instinctively been taking the victories where they can in 2021.

Brisbane singer-songwriter Hope Defteros – who performs without the 'efteros' – is no different.

After endless cancelled shows and dashed aspirations, a form of national validation came in late January when the country started counting down the triple j Hottest 100. "I was at a party with my mates," recalls Defteros.

"I was just really nervous, because I knew that 'Second' had the chance to be in. I was getting tagged in so many people's voting.

"It's the sickest thing ever, but it also comes with so much pressure – this is something I've been listening to for years now. I was feeling nervous instead of just being excited to get f...ed up."

After spending the early hours of the afternoon "pacing around the Bluetooth speaker" as she puts it, Westeros was called by triple j themselves. Sure enough, her single 'Second' had achieved the position of 69 in the Hottest 100. "My friends started going crazy," she continues.

"They were all like, 'where's Hope?' and sprinted outside. We were all just dancing and celebrating. I actually just put up a video – my friend Casey was filming the whole day. It's so fun to relive it."

This added a further sense of momentum to the year ahead for Defteros, who was finally able to complete a national tour in support of her debut EP 'Cash Only', of which 'Second' was lifted.

Update: Hope won the Rock award (for 'Second') at the 2021 Queensland Music Awards. It's the second year straight Hope has won an award at QMAs, after winning the Emerging Artist Award last year.

Hope adds that she feels especially lucky to have performed these shows. "We had COVID on our backs the entire time," she says.

"It was literally following me around, and yet it was fine the whole way through – I even left Brisbane before that actual case came about.

"The fact that I was able to finish the tour. . . I'm so surprised and so happy. It was such an incredible honour to be able to meet all these people that held on to their tickets and still wanted to come and see me. It was really surreal."

With the rust now removed, Defteros turns her focus to getting right back into performing.

She will be one of the many Brisbane artists performing as part of the adapted 2021 edition of the Queensland Music Festival renamed this year to QMF, taking part in the City Symphony event. Participants will get to take in the city with a guided tour care of an interactive app that tells important stories from the area they're in.

Away from that, they will also be serenaded by a series of artists that are tied to the city itself – something that Defteros is incredibly proud of. "I think that any cultural events in Brisbane are just so dope," she says.

"We have so many stories and so much history around us. I love the idea that you can walk around and hear things depending on where you are, what time of the day. . . that's so Pokemon Go! Remember when everyone was obsessed with that? I think that this is super dope, I think that everyone's gonna learn so much stuff. I get to be part of it and do a live gig as well. I'm really excited."

Hope D's debut EP is titled 'Cash Only'. Hope D is also part of the local line-up for the Toowoomba leg of Fresh Produce, which lands at Toowoomnba Showgrounds 3-4 September.