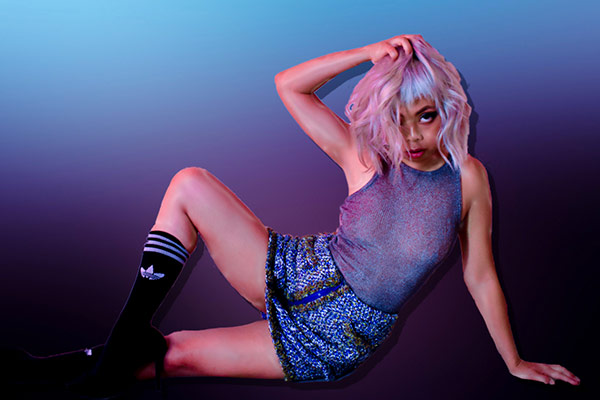 Woven into the track are lyrics reflecting the migrant experience for the Borneo-born, Brisbane-based LÂLKA. She says the rise in anti-racism protests last year was a catalyst for the new music, and in fact something that activated a new passion and articulation within her – something she had not yet unlocked.

“The world's situation caused me to ruminate more deeply on those topics, and that impacted the way I made my music,” LÂLKA describes. “I wasn't able to articulate before what I was feeling and experiencing, and it has taken this time to process and synthesise my experiences in a way that could translate in the medium that I've presented.”

The track is upbeat, glitchy, and easy to groove to in its sound – all the elements of a hyperpop earworm – but most importantly, it's also lyrically tinged with emotion, and a closer listen will reveal a message LÂLKA wants to communicate, and a story she wants to tell, as a woman of colour.

“Tried to be like ya but my melanin is a sin,” she sings. “I'm saturated but you want me faded.”

FROOTY is honoured to be premiering this track a day before its official release – give it a spin below.

'Gradient' was written with LÂLKA's friend Muki, a dance/electronic artist in Sydney. The two came together after having followed each other on social media for a while, and the rest is history.

“She's an incredible writer and artist herself,” LÂLKA says. “We've known each other for a bit – mostly online, as most of my interactions are – before collaborating, so the collaboration felt completely natural and not forced.”

With the song moments away from officially meeting the ears of the public, part of LÂLKA's story and state of mind is also set to be revealed to the world.

She says it's something she hopes will touch those of her listeners who share similar lived experiences, and touches on the power of representation in media.

“I appreciate that everyone interprets music and lyrics through the filters of their own realities and experiences. For any person of colour who has always felt invisible, unseen, or 'othered' – I want them to know that they're not alone.”

“I hope that they find hope and solace knowing that they're not alone. I also want to emphasise that representation is important, and having people of colour in the public eye absolutely owning their art/craft/skills really makes a difference to help other people of colour realise they can achieve their dreams too.”

'Gradient' is one of the puzzle pieces of LÂLKA's upcoming EP, 'Euphoria'. . . A project the artist says is influenced by the pandemic's induced isolation and separation, and its effects on her. The EP features previously-released track, and collaboration with Melbourne singer-songwriter Evangeline, 'Hold Me'.

'Euphoria' comes after EP 'The Way Music Looks' which was release in March.

“Compared to 'The Way Music Looks' ('TWML'), 'Euphoria' as a body of work has a more consistent sound, despite each track having a different character/spirit. 'TWML' sat squarely in the hyperpop sphere; 'Euphoria' is where hyperpop meets rave, with intricate production,” LÂLKA describes. “Whilst both bodies of work delved with topics that were honest and were a reflection of my own experiences, 'Euphoria' is written from a more vulnerable, emotional state.”

“I honestly think 'Euphoria' is my best work to date. Personally, I'm still immersed in it – it hasn't been long since I released 'TWML' before releasing 'Euphoria', I'm still acknowledging and living in the deep weirdness of our present.”

'Gradient' is officially out tomorrow (5 November). LÂLKA's 'Euphoria' EP is out on 26 November.