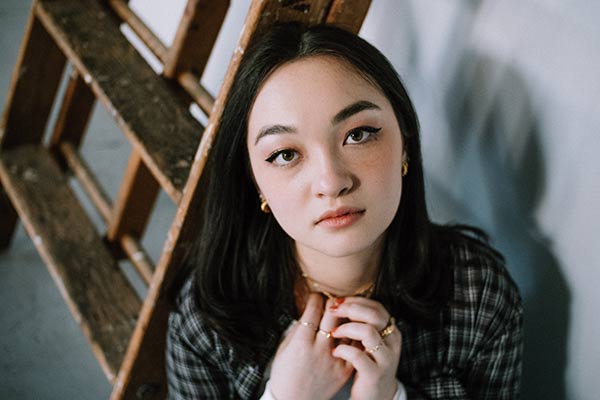 Today, the video for EP track ‘In The Darkness’ is released.

“Making this music video was so much fun, and working with Mika and his team was also a pleasure. The ‘In The Darkness’ video is very much meant to highlight the emotional energy of the game it was written for, ‘Life Is Strange: True Colours’,” mxmtoon (aka Maia) says.

“Incorporating game footage with the background panels in the video really lent itself to trying to create an immersive experience of both live performance and electronic graphics. In the times we’re in right now, sometimes our most wondrous experiences happen through a screen, and the lines between real life experience and online ones are becoming increasingly blurred.

“My hope with this music video is to show how fantastical video games, computer generated graphics, and more can be their own visually stimulating adventure that’s fun for viewers and people to spectate. Also it meant I got to play around with a lot of fun light panels!”

Maia combines two of her greatest passions, music and gaming, through this project. The four-song EP features an mxmtoon original, ‘In The Darkness’, and two inspired covers: ‘Creep’ by Radiohead, and ‘Blister In The Sun’ by Violent Femmes.

Maia continues to use her growing platform for good, speaking to issues such as Black Lives Matter, mental health, and the queer community. A recent alarming rise in Asian Americans has meant that Maia has become an outspoken advocate for the AAPI community, including being a part of a Twitch panel with the platform’s founders.

“I think it’s a huge privilege that I’m able to talk about these issues,” she says. “Hopefully I can inspire others to think more critically and stand up for what they believe in.”