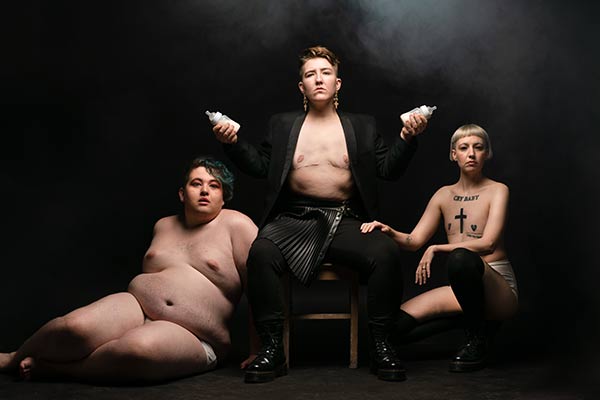 Alter Boy Champion Inclusivity And Empowerment With 'Act Of God'

Perth's Alter Boy is a six-person powerhouse comprising three deaf/hard-of-hearing members, who have just released their song 'Act Of God', along with a powerful video.

'Act Of God' is the first single from Alter Boy's debut EP. It delves into band member Jack's experience as a child.

At a young age, Jack was unable to find a supportive community for himself that he could call home, and this video is a portrayal of this and the internalisation of systemic issues for deaf and hard-of-hearing individuals.

Here, the band chat to us about 'Act Of God'.

Tell us a bit about this new video.
The video is about marginal identity experiences of deaf/hard-of-hearing (HoH) people. A person with a marginal identity state experiences feelings of confusion or anxiety about not belonging to a community or culture. This is a common experience for deaf/HoH people. Many of us did not have access to our community, language, and culture growing up because we were actively denied awareness and forcefully assimilated into the hearing world as a result of an ableist system. When we finally find our community, we struggle to recognise ourselves as belonging to the deaf world in addition to the hearing world. Maybe our Auslan isn’t so fluent, or we don’t have as many connections to deaf friendships or mentors, or we are still learning about our collective history. We ask ourselves: Am I deaf enough? Disabled enough? Skilled enough? Connected enough? Queer enough? Visible enough? We made this music video to tell our stories but also to remind others that they are enough and that their identity and connection with community should always be welcome (with respect and willingness to learn from those who did the groundwork). Those who are disconnected from community, culture, or language, should not be erased, minimised, or debated. Between worlds. Within worlds. We belong here. You belong here.

Why did you want to go down this road for the visuals of this particular song?
We initially wanted to tell the story underwater, but the task proved more challenging than we expected. With a lot of dysfunctional footage and less than two weeks remaining until our release date, we decided to create something intimate and raw. Jack – a fat, gay, deaf man, standing alone against a black backdrop, barely dressed – telling his story.

What was the best part about putting this video together?
The gently panicked last-minute nature of the second attempt fuelled us into the sort of frenzy that really motivated us to bring in as much emotion as possible. Without the set and lighting design and the complex costuming and editing, we were forced to treat the story with as much raw unformatted emotion as possible. It was really great to see Jack signing the film at double speed – he was able to hold this visceral emotion and precision despite the speed, from start to finish. We stood watching with our jaws agape and our hands on our hearts. It was over in a blink.

This is the first track from your upcoming debut EP. What sorts of themes are explored through the other tracks?
The EP tells the story of the grief that sometimes comes with evading society’s expected developmental milestones and choosing the life of an artist or a champion. Of attempting to gain immortality in the body of a mortal. The 'Act Of God' EP draws on the lives of Achilles, Jesus, and other powerful mythological legends throughout history to tell the story of a modern-day life transaction. Alter Boy asks listeners and viewers: Do I build a family or an army? Do I exist for myself or community? Do I live for happiness or fame?

For those new to Alter Boy, give us a rundown of your background/beliefs as a group.
We believe that everybody should be welcome in the arts and that barriers to access and inclusion should be witnessed and removed where possible. We believe that deaf/disabled and queer people are powerful and deserve to be seen and heard. Nevertheless, we need to clarify that we are not spokespeople. We do not speak on behalf of these communities, and we do not represent deaf, disabled, or queer communities. We speak for ourselves, amplify the voices and stories of those around us, and pass the mic where we can.

Why is it important to translate these ideas into music?
It’s important for our own access and the wide access of our communities. As part of Alter Boy, we work collaboratively and collectively, and sometimes that means we need to make concessions or compromises. We argue our perspectives, educate each other, dream up new ways of doing things, and build accessibility features that haven’t existed before. It’s a constant process of negotiation to create access across many, often conflicting, worlds.

What’s coming up in the near future for Alter Boy?
We've been invited to some wonderful events in Victoria and New South Wales so we've put our first little tour together in September and October. We also have our debut EP coming out, and I have a dentist appointment at some stage in August, but I’ve lost the confirmation card so if they could get in touch to reconfirm that’d be great.