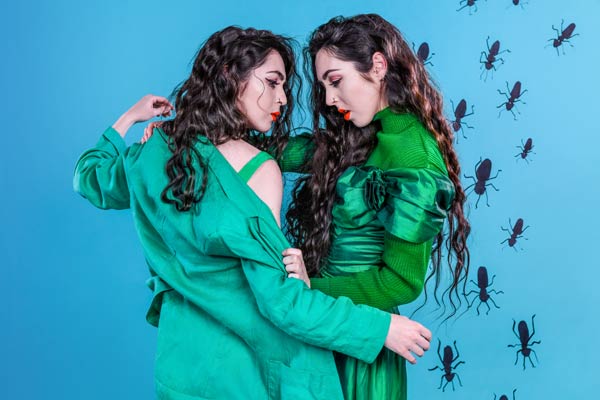 Twins Arna and Vanessa Rogers focus on their elastic vocals and emotive songwriting in 'Paper Love', which is all about the priceless value of deep, supportive relationships.

'Paper Love' was written when the girls moved to Sydney last year.

“At this time all we really had was each other, which was not much but enough, so it sparked inspiration for a song,” they say.

“‘Paper Love’ salutes a connection between people that is far deeper than any monetary or material exchange.

“It's about loving someone so much that you feel inexpressibly content just in their company without needing anything else.”

Check out the track and its music video below.

In the spirit of celebrating fabulous music and the talent behind it, Arna and Vanessa have compiled a list of five favourite tracks by some of their favourite queer artists for FROOTY.

Time to start adding to your playlists!

Aside from her incredible hook-filled pop tracks, Hayley was one of the first artists we saw openly portray queer female love in her music videos. We adored how it was also depicted in a beautiful, warm and fuzzy way, instead of overtly sensationalised or objectified. The queer love just felt honest, authentic and did not jump out as 'different' to heterosexual love stories.

Lupa J is a close friend of ours, but we’re also massive fans of Lupa’s artistry!
We met a couple years ago at a point in our lives where we were all at an early stage of deciphering our identities and sexualities. It was comforting finding so much common ground with Lupa and we believe it would be comforting for so many listeners who can identify. We love Lupa’s bravery in pouring out inner most personal thoughts and feelings into music, just like a public diary. Lupa is also a multitalented and self-efficient powerhouse who also produces, designs and dominates an array of instruments!
We’ve recently collaborated with Lupa and have some really exciting music together!

Christine And The Queens – 'Titled'

Super cool French artist rock solid in knowing herself and her sound. Christine encompasses eloquence, strength and integrity both musically and personally. Her perfect mix of masculinity and femininity and bilingual mix of French and English in her music makes Christine so captivating and multifaceted. We love the strong rhythmic element to her melodies and the crispness of the production is just like biting into a sweet, fresh apple. Her music really encompasses who Christine is – confident, playful, fierce, strong but soft. We also commend the way Christine has spoken out about the importance of not “wearing a queer mask” just to increase ratings or infiltrate the market. It’s not a fashion trend or a choice.

This woman caught us off guard and took our breath away the moment we stumbled across a live session on YouTube titled 'Lost On You'.
It’s that moment when you discover an artist who will be integral in your life and you can’t believe it took you until now. It felt like we’d stumbled upon a pot of gold. We watched this live performance four times in a row with our jaws on the floor. Her voice is so captivating, moving and unmatched. It’s powerful and gritty yet sweet and smooth like honey. She exudes such passion and emotion in her vocals and that’s what we’re drawn to. LP seems so free and confident in her gender expression. At first we didn’t know the gender of this incredible artist and it simply didn’t matter at all. Do angels even have gender? We love LP’s ambiguity and non-conformity to a standard felt by many females in the music industry. She’s totally doing her own thing and that’s inspiring.

A bloody amazing pop prince/princess. Their gender might be ambiguous but their power, talent and importance is clear. We’ve never before heard an artist manipulate their own vocals to portray both female and male. It’s odd, wonderful and beautiful. Their imagery, conceptualism and political statements made in song/video are bold and boundless. Imagine going to a protest and suddenly it turns into a musical – that’s what Dorian Electra’s music feels like. With lyrics that touch on social rules and restraints and videos that are grand, theatrical and fashion-forward, Dorian Electra is an electric wave of fresh air.

'Paper Love' by No Frills Twins is out now.