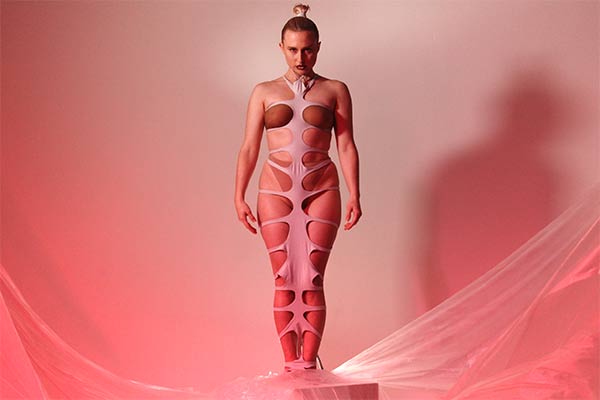 Melbourne-based artist LOUV is here with her debut single, the boldly-titled 'Power'.

It's an experimental pop anthem and a self-assured proclamation of LOUV's inner strength. 'Power' gives us as listeners the first taste of her lush, multidisciplinary world.

The artist says 'Power' grew from its initial roots as a reclamation of energy after a break-up, into a vehicle of fuel for strength and determination to discover her own power.

The video, directed by LOUV herself, is a feast for the eyes, full of striking imagery and expression.

To celebrate artistic expression in the form of clothing, LOUV has listed five fashion labels to watch, including Chantelle Lucyl, who is responsible for LOUV's pieces in the 'Power' video.

Chantelle Lucyl. The body isn’t an empty vessel, it’s a living, breathing organism that’s one with our spiritual, mental and energetic bodies and the whole universe. I love when clothing acknowledges that, empowers me and centres my living, breathing, moving form, allowing me to be sexy while accentuating the life force energy pulsing through me. And that’s exactly what the label Chantelle Lucyl facilitated when I wore Chantelle’s pieces in my Power music video. The interactive, stretchy and strappy designs supported the video’s movement and visual concept of push and pull tension, material manipulation and its deeper story of uncovering one's innate power. The pieces also supported me as an artist whose sexual and bodily expression is fundamental. This has all made so much more sense since getting to know Chantelle better and digging into the label's liberating three part manifesto. The first 'your clothes were made to worship you' going on to later state that clothing should be 'so charged with love for the body, that it will bring us deeper appreciation and communion with the bodies we occupy'. The second, 'Your clothes should make you feel held tightly in love'. and the third 'Your clothes do not have to be about your body. The brain is a sexual organ, too. . . Liberate. Be free. Commune with the inner self that is eternally expressed through sex'. I find Chantelle's manifesto to be a groundbreaking approach in a fashion industry that often focuses narrowly on the visual, forgetting the lived experience of the wearer and asking us to adjust ourselves to its standards and desires. 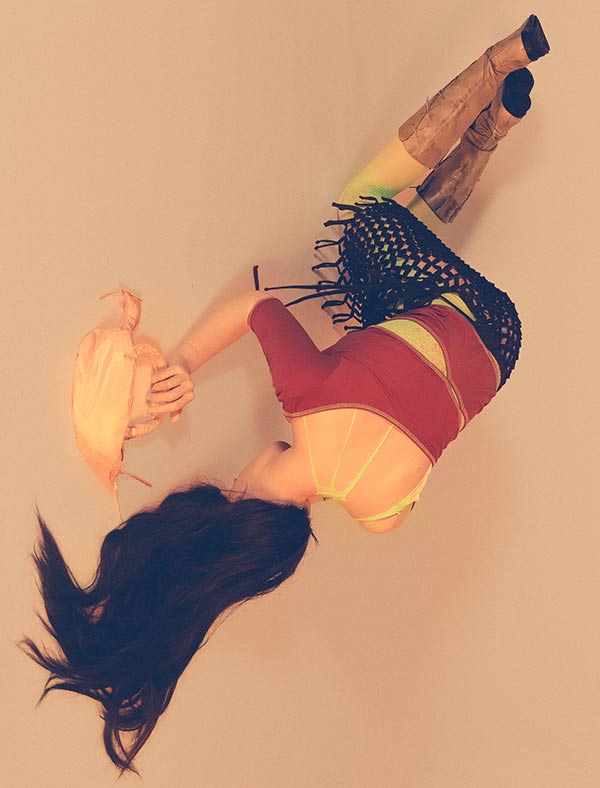 Maroske Peech. Similarly to Chantelle Lucyl I love the way Maroske Peech centres the body and honours the relationship between the human and clothing. As I’ve started connecting more deeply with the sensations of my body when I dance, I’m gravitating towards designs outside of dance too that speak to that human body relationship. I imagine they do this so well in part due to their inspirations and background. Jordan Conder and Elisa Keeler, the Melbourne based duo that form Maroske Peech, are inspired by their childhood dancing ballet and love of costume and the stage. Seen in their theatrical approach and how the pieces, each a statement in their own right, act like an extension of the body wrapping, sometimes spiralling, and revealing, hiding or accentuating different body parts. The ballet influence is clear in their iconic spiral leggings with tendrils that wrap the leg, leotards, spiralling foot lingerie and most recently in their limb warmers. What makes Maroske so special to me is the way they honour the body and speak to my inner dancer while creating a wildly expressive theatrical world that is completely unique to them. 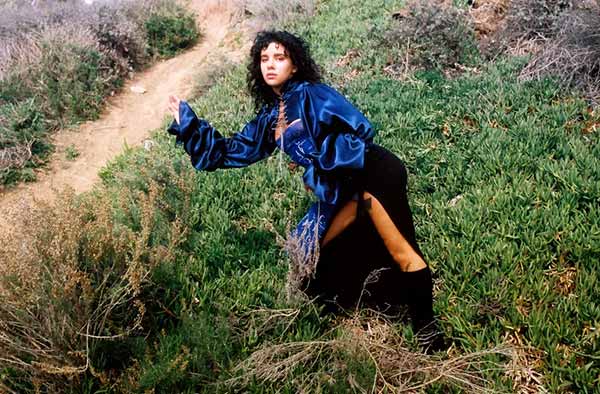 Hanan Sharika. I discovered Brooklyn-based designer Hanan Sharika through one of my favourite e-boutiques, Shop Kathleen. I was instantly enchanted by the ‘Naughty Ballerina Chain Skirt’ as it spoke to my desire to challenge the seen and unseen parts of the body. As I dove through her collections and inspiration I connected more and more with how uniquely rich in meaning and story her pieces are. Hanan means 'tender' or 'compassionate' in Arabic and early in Sharika’s design journey she incorporated her name in Arabic on various pieces to validate the Arabic language as well as Muslim expression and culture. “I put them on my clothes on the denim and on the tags as a way to push against the English language as the global standard and solidity in Muslim expression,” says Sharika. 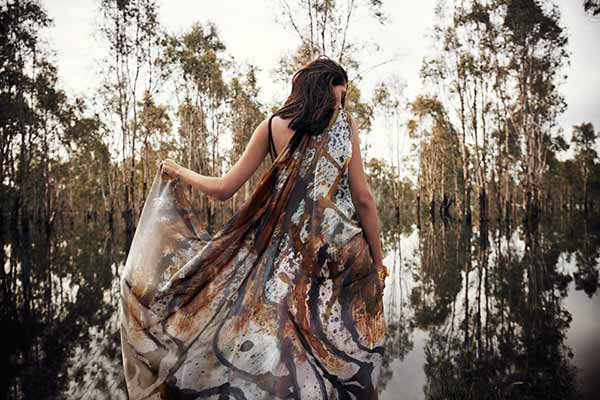 Lyn-Al Young. Lyn-Al Young draws on her Indigenous Australian culture, and the lands of her Gunnai, Wiradjuri, Gunditjmara and Yorta Yorta heritage to create bespoke silk pieces, each telling a unique story. Lyn-Al says each “tells a deep story connected to me, my family, my mob and Country.” Lyn-Al hand-paints her beautiful wearable art pieces outdoors in nature, sometimes even while singing (swoon). The markings painted into her clothing she describes as “traditional shields” protecting those who wear them. When I came across Lyn-Al what first captured my amazement was the expressive markings that ring so loudly of deep cultural connection and a strongly intuitive process. Her work is a gift to observe and I can only imagine how special it would be to wear pieces hand-created in nature by an artist so connected to story and culture. 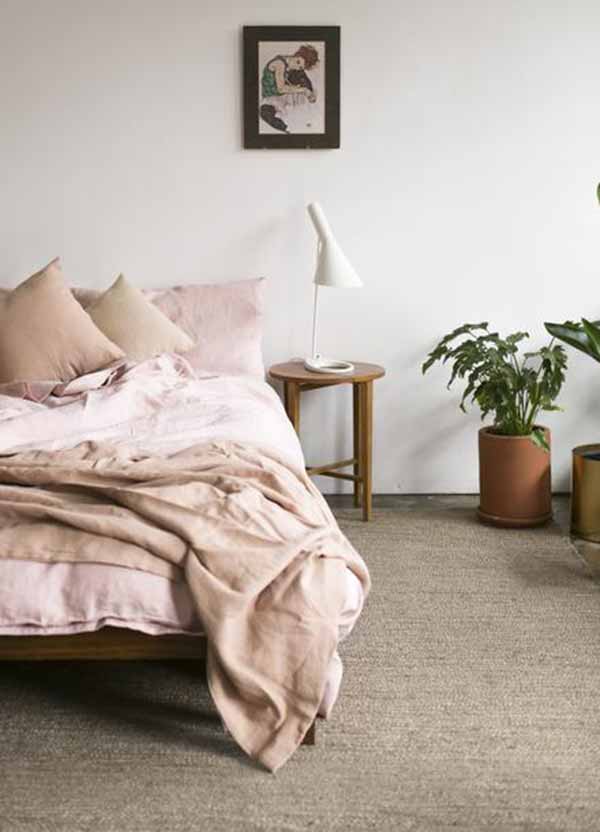 Good Studios. My final selection is Adelaide-based eco label Good Studios. I’ve long admired their community focus, minimal yet beautiful aesthetic, and ethical and sustainable design approach. Good Studios was founded by production designer and stylist Anny Duff. The label designs and produces everything in South Australia using sustainable fabrics like hemp linen, organic cotton and wool as well as oeko-tex certified dyes, recycled zips and biodegradable buttons. Everything is designed with the full life cycle of each garment in mind embracing sustainability wherever possible. I also really admire that they’re using their design world as a platform to educate the community and individual users around sustainability in the realm of fashion. My absolute favourite part of their offerings is the hemp linen bedding. I get really hot when I sleep – I’m like a living, breathing hot water bottle so sleeping in hemp linen is perfect for me. Hemp breathes naturally and is responsive to the body's temperature, cooling in summer and warm but not too warm in winter. I have their indigo doona cover and as they promised it’s like dreaming in a sea of indigo.