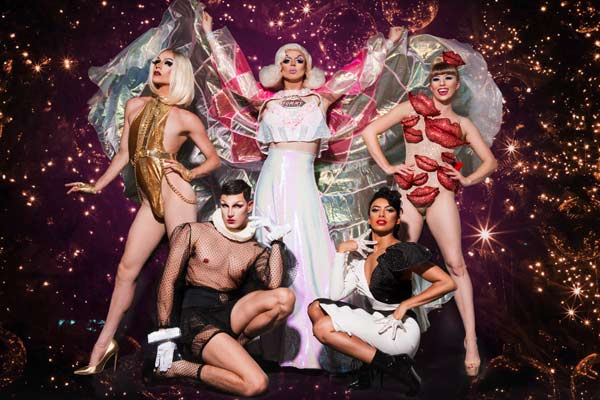 After four years of touring success both nationally and overseas, drag cabaret showcase YUMMY is back with its most exciting project yet – 'YUMMY UNLEASHED' – performing as part of Sydney Gay And Lesbian Mardi Gras in 2020.

After a string of shows all around the country,‘YUMMY UNLEASHED’ will enter Sydney with a bang at Seymour Centre. It's a blend of drag, choreography, cabaret and burlesque.

“It’s an LGBTQIA+ show but it’s also inclusive and has a gender balance amongst the cast which is kind of a point of difference for us compared to some other drag shows. Also, our show, it really acknowledges the power of joy and I think there’s no more joyful celebration than Mardi Gras. Well, we always bring the party. We’re professional party-starters.”

Though the show has done pop-up events at Mardi Gras in previous years, James says 2020 really does feel like their debut.

“We’re very excited about being at the Seymour Centre. We’ve been in discussion with them for years and it’s really great that this is actually happening now. Our time is now. We’re ready for it. The Sydney Mardi Gras season comes at the end of a five-state tour for us. . . And then the last stop on our tour is Sydney for Mardi Gras so it’ll be a real celebration.”

“It’s the rainbow palette and just makeup that we actually will be wearing. . . It will be available online and it’ll be available at the show for people to grab themselves one and I feel like that’s the cherry on top. No one else has that and to have a rainbow palette of really, really bright pigment and glitter, it’s just perfect for Mardi Gras.”

In the last few years, James explains that there has been a noticeable shift in terms of how the public react to LGBTQIA+ culture, and says that through visibility, performing artists such as those in the cast of YUMMY have played a role in this shift.

“Audiences want to see themselves represented on stage so that’s important. I think what it all comes down to is that we make the show that we would want to watch, so we don’t really have a political message that we force down people’s throats. We’re not didactic in that way. We just exist, by existing and by living our best lives. That’s how we are an example.”

James also attributes the continued success of YUMMY to the incredible relationships, both working and personal, between the cast.

“We really get to be ourselves and all the performers in the show are artistic collaborators too. . . And I think you can really feel that; you can tell that it’s a super inspired, energised show and our ensemble, we really work together.

“We’re truly very close and we protect each other and support each other. I think my dream for YUMMY is for it to be more supported and to exist in the ultimate context. I don’t really think you can get much better than Mardi Gras! We’re living our best lives. We’re doing it!”

‘YUMMY UNLEASHED’ will be playing at the Seymour Centre as part of Sydney Gay And Lesbian Mardi Gras from 26-28 February.