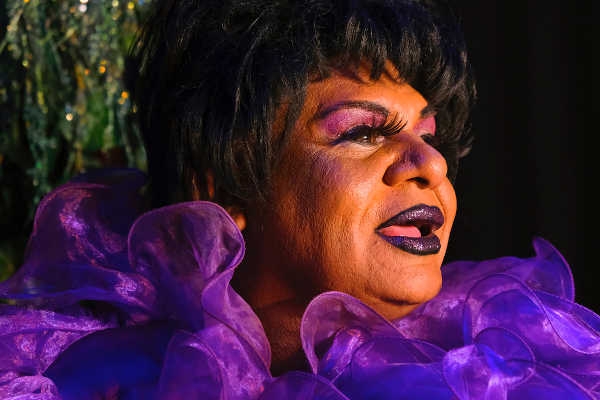 Graham Simms, a Gadigal man hailing from Redfern, is a powerhouse of energy and humour.

His lightheartedness tangles with his vulnerability as he talks about the highs and lows of his life; how he would wear his mother's frocks as a child and stomp around in her clogs, or being engaged to a woman for four years before he came to the realisation he was gay.

If you know anything about Graham Simms, you'll know that Graham is just one of his identities. He is well known for his other identity – Nana Miss Koori, a drag sensation named after the inimitable Nana Mouskouri who he has performed as for the last 20-plus years.

Now Nana Miss Koori has the opportunity to sit back and let younger generations pay tribute to her.

Vivid Sydney is an opportunity for artists of all backgrounds to express themselves in a playground of wonder and excitement, none more so than up and coming performers ready to take the stage and make their mark.

Nana Miss Koori will feature as part of Queer Performance Icons, a series of three free events (staged every Wednesday throughout Vivid Sydney) at The Bearded Tit celebrating three local icons of queer performance – Frumpus and Cindy Pastel are the other two artists.

Each event will feature younger drag performers matched to the respective icons who'll each pay tribute to them as pioneers who have paved the way for them.

"I certainly love to platform, support and be there for the younger generations in heels after me," Simms says, aware of his impact but humble enough to defer to emerging talent.

Growing up in inner city Sydney, better known as the Eora Nation and home to the Gadigal and Gurang-gai people, Simms began drag as a young adult, performing at the Imperial on Oxford Street, which was where drag queens were more accepted at the time.

Now 52, Nana Miss Koori has performed for many different organisations: community groups, corporate, and not-for-profits, which he considers "truly a blessing".

"I'd always say to myself that I'd love to do that one day. And years later, I have been."

Now she's taking on Vivid Sydney in a new way. Instead of performing herself, Nana Miss Koori will pass the baton to younger drag queens who have followed in her heels. A few lucky queens will enjoy the spotlight as they interpret and perform their own tribute to Nana Miss Koori, inspired by her story and spurred on by the shine of her brilliance.

In 2021, Simms feels there is more support and acceptance, not just for drag performers, but also for First Nations peoples and performers, new, old and emerging – and Vivid Sydney is the perfect opportunity to showcase them.

From light installation artists to spokespeople of socially conscientious issues, Vivid Sydney will draw artists from all over Australia and the world to explore the best humanity and art has to offer.

Jameela Jamil will further her agenda of body positivity in Body Politics, a continuation of her I Weigh podcast and YouTube channel. Inner West Reggae Disco Machine and El Gran Mono will collide in a solar system rocking experience of Latin American music and 21st Century soundsystem.

SHARD will shine a light on the history of this gorgeous country with respect to its First Nations past, by highlighting the stories of Baykali Ganumbarr, Yalyalwuy Gondarra and Watjarr (Marko) Garmu.

Vivid Sydney runs from 6-28 August, with hundreds of exhibits and concerts for art and music lovers of all kinds. You won't want to miss out.