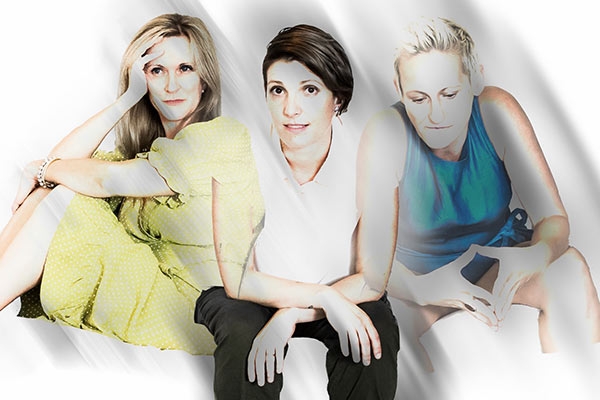 The performance is a story of family, mental health, love, strong women, supportive men, and everything in between. Audiences will live the love, loss, grief, laughter and death of three generations of women and be asked to consider the baton passed between each.

‘Anatomy Of A Suicide’ offers a bird’s eye view of this group of people from the ‘70s to the ‘90s and into the future, with plenty of questions and challenges along the way.

Queensland.
What you need to know first up is that this play, written by acclaimed UK playwright, Alice Birch, is Queensland’s premiere production. That’s right, this show has never been performed before in Queensland. Move over Shakespeare and Pinter, Alice Birch has arrived! ‘Anatomy Of A Suicide’ has only ever played to audiences in London, New York and Sydney. Now it's Brisbane’s turn. And watch out. It’s going to knock the wind out of your sails – in a good way and for a whole bunch of reasons I’m about to list.

The Story. And. The Feelings.
A bit about the show: I mean, kind of important really.
It is an electrifying examination of love and trauma of three generations of women. It asks big questions about inheritance, the fragility of the human mind and the legacies of grief. In its scrutiny of suicide and family trauma, perhaps its most crucial question is: where do genetics end and personal choice begin?
You’re hooked, aren’t you? Good, keep reading.
The Feelings.
Don’t be put off by the title of the show. As we all know, there is still stigma attached to the word ‘suicide’. However, Birch in her interrogation into mental anguish with the simultaneous stories that are being told on stage, with up to ten voices heard almost concurrently, flowing in and around each other in a unique symphony, will leave you feeling all of the feelings. And this is a good thing. A really good thing.
We have just emerged from months of lockdown where we have all buried our feelings and emotions. There has been very little outlet to express ourselves and quite frankly, emotionally unpack the last 12 months.
What pandemic?! Now it’s time to get those feelings out and let the theatre do its thing and move you.
The play moves fast enough for audiences and actors to not wallow or indulge, and in the wake of a world in which mental health is at crisis point globally, as we examine the fragility of happiness and the way we live, this show is timely. This is a big reason as to why we are doing this show.
‘Anatomy Of A Suicide’ is essentially three dramas set in different time periods, all performed on stage at the same time. It concerns a trio of women: Carol in the ’70s, ’80s and ’90s, Anna in the ’90s and ’00s, and Bonnie in the 2030s. Time to book that ticket, don’t you think?

Motherhood.
I’m a mother and this play hits hard, knowing that post-natal depression is as stigmatised as suicide and Birch puts both to the forefront. She does not shrink from the toughness and complexity of her subject matter. Why should she? She is a mother of two herself. We need to shine a light and continue the conversations about these matters and this play does exactly that.

Queer Community Night.
This show also features a queer narrative as one of the main threads through the story. As theatremakers and artists it is imperative that we have represented this story with authentic lived experiences of actors who identify as such. A large percentage of our cast and key creatives identify in the queer space and so we thought it the perfect opportunity to celebrate the community and invite them to our Queer Community Night on 27 May at 6.30pm. The night will feature keynote speaker Krissy Kneen, an award-winning writer, esteemed author and poet, ally for the queer community and of acceptance of all bodies and identities, as well as other queer-identifying artists including a DJ and spoken word poet – Chalise. Come along and check it out before you take your seat to the show. We would love to have you.

The Rabbit.
Apart from the beauty of this script, the intense striking subject matter, and ten of Brisbane’s finest actors on stage, there may also be, if you’re lucky, a stuffed rabbit that is lovingly used throughout the show. You’ll just have to now, without further delay, book that ticket!