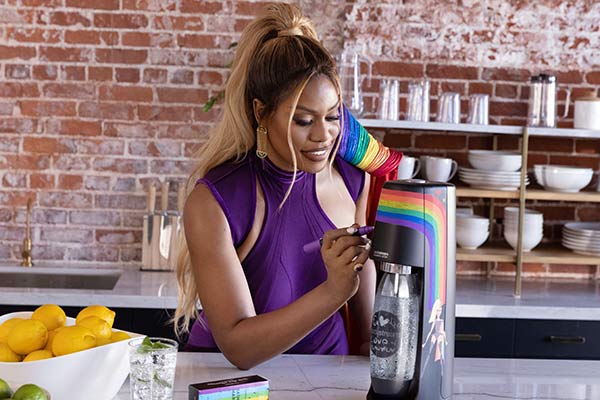 Laverne Cox And SodaStream Team Up For Rainbow Story Campaign

The campaign takes shape in the form of an animated film entitled ‘Rainbow Story’ as well as a new special edition sparkling water maker with rainbow markers.

The animated film sees Laverne star as a superhero – she takes viewers through key moments in her life beginning with a live-action sequence and transitioning into animation as her story unfolds.

Laverne evolves from childhood and takes part in major milestones for LGBTQIA+ rights, celebrating her personal achievements – some of which were a first for the global trans community.

Ten per cent of the proceeds from SodaStream’s ‘Rainbow Story’ products will go towards ILGA World, a global non-governmental organisation (NGO) which SodaStream is partnering with for the third year in a row.

“I love SodaStream and I love the idea of being a superhero. I also love that part of the proceeds from the sale of this Rainbow Story SodaStream are going to an NGO that services the LGBTQIA+ community all over the world”, Laverne says. “I think giving back and being of service is really what it's all about.”

The new SodaStream kit is a sleek, matte black design and comes with a pack of rainbow markers, inviting consumers to illustrate their own personal pride stories on their SodaStream.