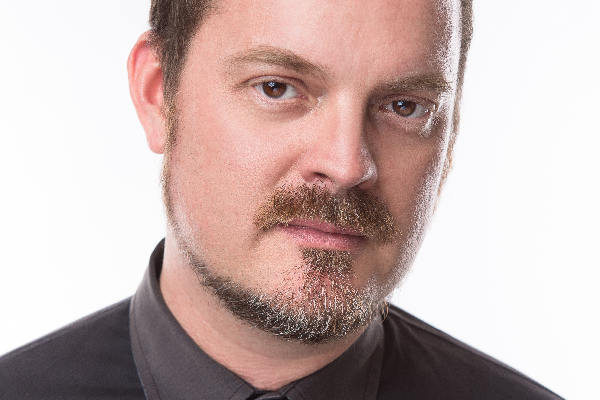 What do you do in your day-to-day life?
I'm what's known as 'fulltime freelance' which is a fancy way to say I don't have a proper job! My current projects are the MELT Queer Arts Festival which I direct at Brisbane Powerhouse, and the Integrity 20 human rights conference/festival which I produce for Griffith University.

I also run my own production company called Electric Moon which produces a variety of music events. As a self-employed producer/event director and musician so every day is different for me, juggling these hats and making everything happen smoothly.

Why do you do it?
The truth is I have a very low boredom threshold, I'm always looking for the new, exciting project and I get antsy when things are too easy or too routine.

What do you love about the city you live in right now?
A few years ago I moved out of Brisbane and I now live semi-off-grid in a forest with no neighbours at Mt Nebo. It's certainly made me appreciate city life in a different way - I enjoy it when I go in but sometimes I do get a bit of culture shock, especially when there are lots of other humans around!

What's the best thing about being a part of the LGBT+ community?
I think that is hard to quantify as I have had long periods of being very involved in the community (as an artist and organiser) and then some periods where I have concentrated on other things, other parts of life. From my perspective as an artist, who is occasionally also seen as a 'queer artist', and from my position as a queer arts festival director, I see a huge amount of drive and innovation happening - there are so many stories to tell and the world is changing quickly at the moment. I'm very excited to be a part of that.

In your opinion, what is the most misunderstood thing about the community?
I think it would be obvious to state the amount of misinformation that has been spread by the 'No' campaigners. I think the best one is that marriage equality will mean no Christmas. How anyone can take that seriously is beyond me, but I do agree it might hold appeal for some people (I'm a bit of scrooge/curmudgeon...). More broadly, I think there is a long tradition from straight people whose eyes light up when they find out you are queer and excitedly report that you must meet their friend from work who has just come out, and do we already know them. As if there is a secret network and handshake system. And of course there is (sshh).

As if there is a secret network and handshake system. And of course there is (sshh).

Do you have an LGBT+ icon/spokesperson that you look up to and if so, what do you love about them?
I've encountered many people like this over the years - I'd mention Nina Seto and Cathy Sidders who pioneered the Pride Festival in the '90s. More recently, I would mention Peter Black, who is one of the many people tirelessly campaigning for Marriage Equality in the most intelligent, considered and elegant way.

How do you define happiness?
I think being able to understand the perspective of other people, and also to be kind. In more practical terms - sleeping in, mexican food and playing loud music.

Are you happy with your work/life balance?
I'm currently happy enough with it that I am not considering any dramatic sweeping changes. I've learnt that I have to be very tolerant of going through many phases, and not being able to control them all.

If you could travel back in time for a day, where would you go?
I think I would go to England in the late 19th century but only if I had a huge amount of money. If not that, perhaps to the '70s so I could see concerts by Bowie, Patti Smith, Talking Heads and Lou Reed. If I could do that there is a high probability I would not return!

What is the best lesson you've ever learned?
To understand that we are less special than we think we are. This might sound negative, but I think it's true. I like to keep perspective on things, and this actually drives me to improve - to be a better musician, better programmer, a better producer. Living in an ancient natural environment is also a good reminder of our place in time and in the world. I swear I am not a hippie!

What is your spirit animal?
I had to look this up... apparently I am an Owl according to the highest scientific test I just completed. I thought this meant Older Wiser Lesbian but I must be mistaken... I was hoping to be a cat!

I thought this meant Older Wiser Lesbian but I must be mistaken... I was hoping to be a cat!