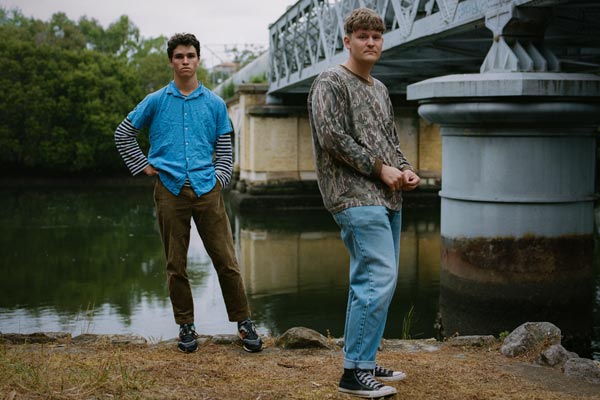 Sydney singer-songwriter Huck Hastings was working at a cafe/bookshop in Bondi when he met Sachin Burns.

They became fast friends through a mutual admiration for well-crafted pop music, and would make it through evening shifts by sharing musical discoveries with each other.

Eventually, the two began to make music together and on a staff trip to the south coast of NSW, they spent time climbing trees, hanging out poolside and playing this music to their colleagues.

Hacky Sack's debut single, from an upcoming EP, is one of those songs you sway and groove along to. . . It's dreamy and light – an exploration of unrequited love. 'Exaggerating' was recorded from the comfort of their bedrooms, mixed by Oscar Sharah and mastered by Tim Carr.

Below the dreaminess are themes of depression, longing, and uncertainty.

"I’ve been thinking a lot about the concept of romance lately, and how toxic it can be," Huck says. "I wanted to explore the idea of having feelings for somebody without expecting anything back. an unpossessive kind of love."

"I’ve been very into these kinds of shimmery guitars and it sounded interesting to set it against the electronic drums and create more of a bedroom-pop sound that fit the tone of Huck’s lyrics," Sachin adds.

'Exaggerating' is out now. It launches officially at Giant Dwarf (Sydney) on 21 November as part of Two Queers Festival.