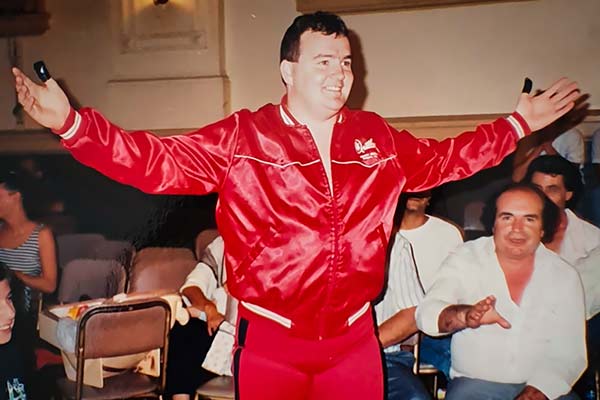 Ken 'Dazzler' Dunlop Reflects On Wrestling Career, And Coming Of Age During The AIDS Crisis, In Autobiography

Ken 'Dazzler' Dunlop presents the first ever autobiography by an Australian professional wrestler, 'Inside My Squared Circle'.

The autobiography chronicles Dazzler's humble mummy's-boy beginnings, 24 years of professional wrestling and living openly as a gay man. His career just happened to coincide with the AIDS crisis – a time when homosexuality was not only still taboo, but also a criminal act.

The Hall Of Fame inductee describes how he body-slammed and clotheslined his way through a memorable career of highs and lows, triumphs and tears, crossing paths with the likes of Andre The Giant and Mario Milano, and teaching many aspiring young wrestlers to be the best they can be.

'My Squared Circle' tells of how Dazzler did it all with passion, loyalty, and honesty. He reflects on these experiences now married, retired and living a simple life in Sydney.

Here, we have a chat to Ken 'Dazzler' Dunlop about the upcoming autobiography. 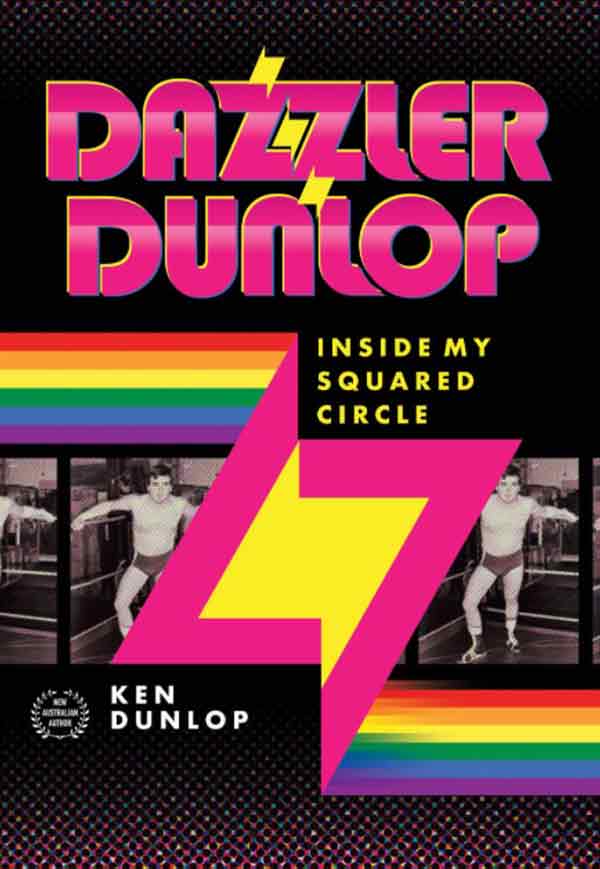 Tell us a bit about what you explore in 'Dazzler Dunlop Inside My Squared Circle'.
My autobiography is a graphic look at my life from the young, innocent country boy to the fully out-and-proud gay man inside (and outside) the macho world of professional wrestling. It tells the story of how I went from watching wrestling on TV with my family to becoming a professional wrestler at age 16 after being forced out of school. There are stories of laughter, triumph, heartbreak, and struggles with depression, all during a period when AIDS was at its peak and when being gay was still illegal in some parts of Australia. And of course my sexuality, something we were not encouraged to talk about back in my day, and my coming out story.

Why did you decide to put this story in a book?
Over the years, when l would catch up with some of the old wrestlers and fans, we would sit around and chat about the good old days. I have many stories to tell in my years in the wrestling business and because they loved hearing about them, they encouraged me to write a book about my life. At the time, I was working such long hours as a hardware store manager that I couldn’t do it, but the thought stuck in my mind. After I retired from work in 2017 at the age of 56 (mainly due to bad health from my wrestling days) l started putting pen to paper, and here l am. The book has taken me over two years to complete and l am proud of what l have accomplished.

You’ve been with your husband for 18 years. How did you meet?
I first met Joey way back in 2003 through one of the first gay dating sites, Gaydar, which still exists apparently! I thought everything was Grindr now [laughs]! We met outside the old Hum music store in Oxford Street (where Chemist Warehouse is now) and went for a coffee down the road at Gloria Jeans (Is that still there? We haven't been to Oxford Street since we were locked down in June). It was love at first sight and we connected straight away. Within six months we were living together, and a year later we purchased our home in Sydney’s inner west, which we still live in today. Joey is 13 years younger but he retired at the same time as me so we could spend as much valuable time together as we can. In 18 years together we have rarely been apart; in the last 4 years we have been with each other basically 24/7 and that is how we like it. 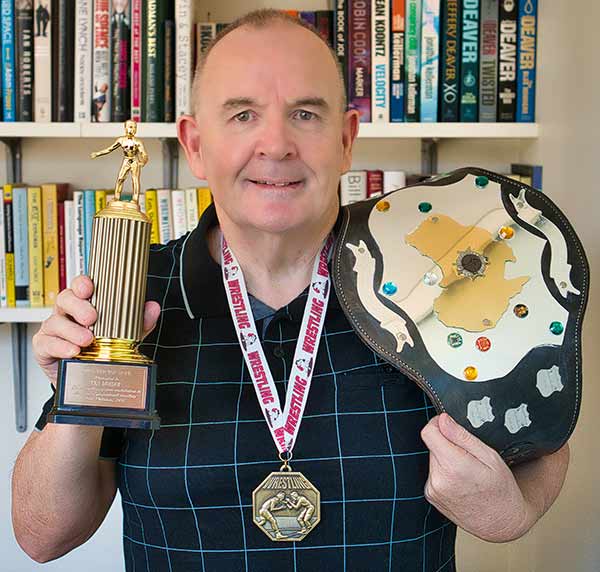 Ken (2021) with Over The Top trophy, Hall of Fame medallion, and tag team title belt

What was the highlight of your wrestling career?
Bloody hell, there have been so many! Wrestling the legendary Ken Medlin at Festival Hall in Melbourne (my favourite venue) in front of 6,000 fans with the late great Jack Little as the ring announcer was one. Wrestling on a tour of the UK in their summer of 1992 was another. And of course I can’t go past touring with such superstars as Andre The Giant, Don Muraco, Killer Khan, Cyclone Negro, Spiros Arion, and Mark and Jay Youngblood! Or appearing on TV shows such as 'The Steve Vizard Show', 'Ernie And Denise', and 'The NRL Footy Show'! But best of all, I think the most important thing to come from my career was lifelong friendships with people like Steve Rackman, Roy Heffernan, Larry O’Dea, and Ron Miller, who were all household names back in the 1970s and ‘80s.

What made you want to get into the world of wrestling?
Back in the 1960s and ‘70s when I was a kid, wrestling was huge in Australia. World Championship Wrestling had one-hour shows on TV twice a week and sold out shows all over Australia six nights a week. Living in country Victoria at the time, I remember the wrestling would come to town three or four times a year and my whole family (who were mad wrestling fans, especially my mum!) would take me along. After seeing the amazing athletes live in action, l was hooked, and from the age of seven, if you asked me what l wanted to be when l grew up, l would say a policeman or a professional wrestler. Unfortunately, a stupid rule at the time prevented me from joining the police, but that was probably a sign from above that I was destined to be a pro wrestler!

What was the biggest challenge you faced during your career as a wrestler?
Being accepted for who l am. As l said earlier it just wasn’t talked about back then. l certainly didn’t shout it from the rooftops but if l was asked, l would always be honest with my answer. Looking back, I was incredibly lucky to having only once been verbally abused in the ring by an opponent. That shocked me at the time as I didn’t have any other problems otherwise. Another challenge I faced was not being blessed with a prototypical body for wrestling. l hated lifting weights as well so l had to work twice as hard on my skills and stamina to compensate. Fortunately all that hard work paid off. 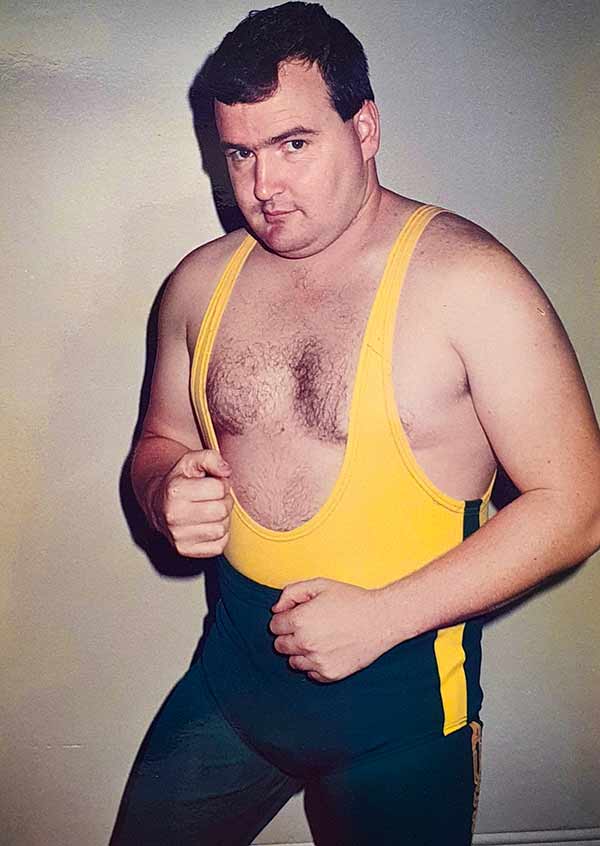 This is the first biography from an Australian wrestler, what are you hoping the main take away is?
That professional wrestling in Australia is a great business to be involved in, and how exciting it is. Most importantly, I want people to know being openly gay is not a barrier to success in such a tough and macho sport. Hopefully my story gives the LGBTQIA+ youth of today the strength and confidence to follow their dreams like I did.

What advice do you have for a young queer person in today’s society who is struggling to come to terms with their sexuality?
Luckily in 2021, there is so much support out there to help someone struggling with their sexuality, such as Lifeline, QLife, and Kids Helpline. Don’t be ashamed or embarrassed to seek assistance, as it is not a sign of weakness at all. l had to see a counsellor a few times when l was struggling and it was a huge relief and help. Believe in yourself, respect yourself, and most importantly, love yourself, because everyone deserves that. Surround yourself with friends and people you can trust. Over the years, l trained many young men to become wrestlers but sadly, quite a few were from broken homes. One was even homeless so l gave him a safe place to train and a roof over his head. At one stage I even had to rent a bigger place because I had three guys staying in my one-bedroom unit! Mentoring young guys was a great way for me to give back and l have supported them whenever they needed me. Thirty years later watching them blossom gives me great satisfaction, and I am happy I am still part of their lives.

'Dazzler Dunlop Inside My Squared Circle' is released on 10 November.