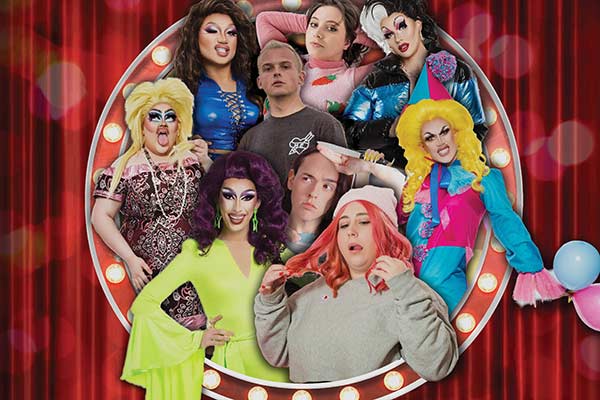 What happens when drag performers and stand-up comedians switch roles for the evening? We’re about to find out with 'The Switch Up’, playing Brisbane in June.

Drag performers Henny Spaghetti, Barbie Banks, Freya Armani and Beverly Kills will be bringing oodles of fabulosity to the stage; while comedians Thomas Bleach, Mitchell Coombs and Edan McGovern will be sure to have the audience on the edge of their seats with laughter.

Act one of the evening will see each of the performers in their element, showcasing their talent and doing what they do best. For act two, the roles will be reversed with the comedians putting together their own drag performance and the drag performers participating in a roast!

Fabulous drag queen Lulu LeMans and hilarious comedian Rhi Down will steer the ship as the event’s hosts and have been spending plenty of time preparing to switch roles.

For Rhi, it’s been all about the makeup.

Meanwhile, Lulu has been looking to her female comedic heroes like Joan Rivers and Kathy Griffin for inspiration.

“I like really stupid humour as well so I like to reflect on that and look into all of that sort of stuff and remind myself of why I got into this in the first place; because it’s just so good. It’s so funny.”

One of the most important and special aspects of the show is the diversity of the line-up which, Rhi explains, shows can be boring without.

“I’ve been on line-ups where it’s just clones of the same guy and it feels like you’re watching one person for an hour. It’s obviously important to have equal representation but diversity makes shows interesting.”

Lulu explains, “I think, the fact that we’re going to be showcasing some of our best drag performers in Brisbane to what will probably be a 50 per cent comedy audience, we get a chance to expose them to whatever we put on the stage.”

She continues by explaining that most people’s references of drag nowadays is through 'RuPaul’s Drag Race'.

“Unfortunately, you normally get one or two types of drag, usually drag queens. But by getting to show off a diverse range of performers from all different backgrounds, I think it’s a really good way to let people know that the local scene and the depth of talent that we have here is a lot more than just pretty pageant girls doing the splits on stage on a television show.”

And what can we expect to see from the hosts themselves?

“I’ll probably come out and do something fun and light-hearted, set the tone nice and fun and happy at the beginning,” Lulu describes. “Thankfully I’m so talented that I’ve got so many things to choose from that I could do. You better believe that when it becomes time to moderate the roast, I will be. . . Setting the tone for that as well.”

Rhi continues, “All I can tell you is that I’ll be trying my best! Lulu and I have some secret things planned but I can’t reveal anything!”

‘The Switch Up’ plays at The Outpost (Brisbane) on 20 June.