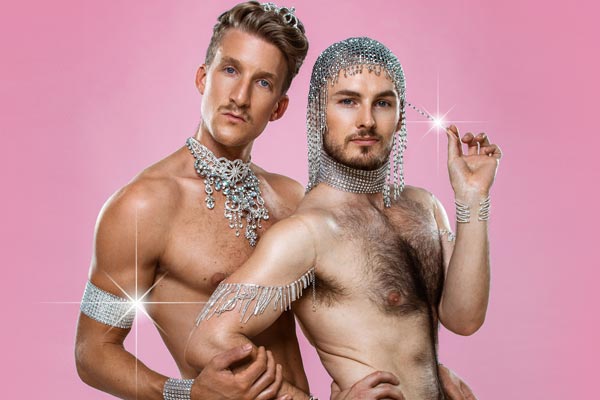 Diamonds really are a boy's best friend, aren't they?

'Sugarbabies', playing as part of this year's fabulously frivolous Feast Festival, is an exploration of the global phenomenon that is sugardaddies/sugarbabies worldwide.

The stunning Ziegfeld boys will take to the stage to tell the story of two sugarbabies in particular, on a quest to find their very own sugardaddies – and of course, the lavish lifestyle all of that brings with it!

It's a blend of old world burlesque, musical theatre, and some clever comedy.

Don't worry, there's plenty of glitz and sparkle in there too. Not to mention sequins, feathers, glitter, and jewels. These boys will be showing plenty of skin, naturally, so make sure you're up for it!

So who are the Ziegfeld boys? Glad you asked. . . Or, rather, we asked. They're paying tribute to the decadence, grandiosity and beauty of the great Ziegfeld follies, while also giving a fresh take on the genre. We've got the lowdown on the boys in this performance: Josh Sanders and Jack Wunsch.

Josh Sanders (Baby 2) wrote the show. He wanted to use the fabulous world of burlesque in order to tell a story and create a cohesive show with a plot, characters, and a strong theme. In the process, Josh was keen to make some classic, sexy songs relevant to a modern audience (and gender-swap them, of course).

You can expect to hear 'Diamonds Are A (Boy's) Best Friend', 'Big Spender', 'My Heart Belongs To Daddy', 'Love For Sale', 'Money Makes The World Go Round', 'Always True To You (In My Fashion)', and more.

Josh completed his Bachelor Of Music Theatre at the Ballarat Academy Of Performing Arts in 2014. He has performed in roles as part of 'Spring Awakening', 'When Midnight Strikes', and '42nd Street'.

Jack Wunsch is stepping into the role of Baby 1. He graduated from The McDonald College Of Performing Arts in Sydney, specialising in Music Theatre and Ballet. While Jack was studying at Victorian College Of The Arts, he featured in short film 'Sweet Dreaming', and as a vocalist in 'Morning Melodies: Hollywood Movie Musicals'. Most recently Jack performed in 'Priscilla, Queen Of The Desert' and 'Burn The Floor' with Norwegian Cruise Lines.

Rhys Velasquez is choreographing the show. He's originally from Queensland and has been involved in the world of dance from the age of seven. His stage credits include two seasons of 'Mad World', four seasons as Swing, Dance Captain and Associate Choreographer of 'PAW Patrol Live', and in 'Carrie – The Musical', playing Freddy.