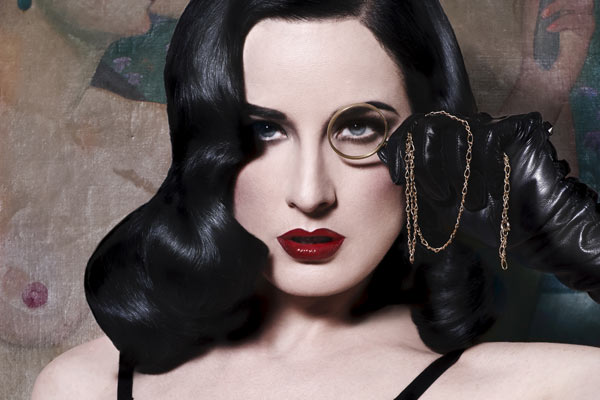 Dita Von Teese Shimmers And Shines In The Glamonatrix Tour

Dazzling international Queen Of Burlesque Dita Von Teese is headed back to Australia with the most lavish touring burlesque show in history.

'Dita Von Teese: Glamonatrix' takes audiences on a stunning visual journey, with performances upon performances of extravagance and sheer delight.

Dita took the time to answer a few questions about the event, touring the country from late November.

You built this show after feeling super inspired from your previous Europe show. Where do you start when it comes to putting a production together?
Lately, it starts with my big New Year’s Eve Gala I do every year at one of the historic theaters in Los Angeles. I’ll debut two or three acts, and then afterwards I expand on the ideas and make them part of a new tour. I also consider the acts I have that either have never been on tour or haven’t been to certain countries, and then I will think of ways to bring it back to the stage in a way that makes it exciting for me again.

It has four new acts. What can you tell us about the acts?
I don’t really like to say too much because I like it to be a surprise. . . But I think most people know that there is an act I call 'Lipteese', which is a vintage fetish John Willie/Charles Guyette dream brought to life and when I did that in the US and showed some videos and pictures, people went crazy for this because I think they’re so used to seeing me in classic modernised 1940s burlesque Technicolor fantasies. There are also a lot of long time friends that know me from my early years as a fetish model. In the early '90s, that’s where I got my start, re-creating John Willie drawings and photos, Bettie Page Bondage pictures, playing the damsel in distress or the dominatrix. I never really explored this very much on stage because I did it so early on and love the idea of taking all the typical black patent leather out of it and 'disguising' the fetishistic elements. Still using hallmarks of fetishism, like fetish shoes and corsetry, but turning it upside down with ice cream colors, feathers and rhinestones. Now that I’ve definitely done all that for quite some time, I thought it would be fun to go back in time and reimagine some of the stuff that first paved the way for my career. The first thing that I did was ask Christian Louboutin to make his version of the fantasy boots that John Willie would draw in his Bizarre magazine from the 1940s and 50s. I feel like with creating the shows and the costumes, there always has to be something that is just completely over-the-top, something that no one has ever seen in real life before. So I’m always pushing everyone I work with as collaborators, and although I think I probably drive them crazy, we actually do come up with things that we can honestly say “we invented that!” 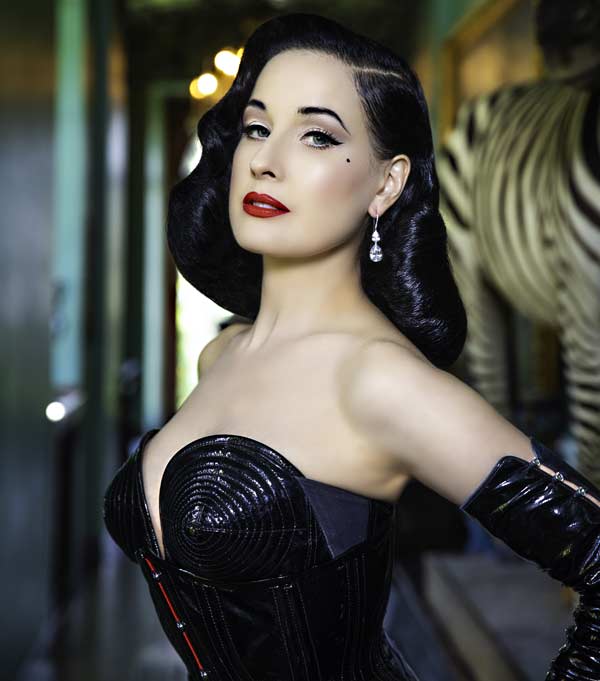 What do you love about the art of burlesque?
I loved the idea of styling myself in vintage glamour, being photographed as a pin-up and performing as a burlesque dancer. I didn’t feel like there were many role models of eroticism and sensuality in mainstream media at that time, and so that’s why I looked to the past, because I felt it was more about creating fantasy, artistry and artifice. In fact, to me, when I looked at before and after pictures of stars that went to Hollywood in its golden age, it was clear that things like red lipstick, fancy hairdos and alluring clothes, one could weave a web of mystery and allure. That was a far cry from prevalent imagery of the 'natural' beauty of the supermodels in the '90s when I was a young adult trying to find my way. I never had anything in common with that type of beauty, so, I took inspiration from the past. Burlesque is about creating a fantasy and any woman can learn ways of doing that in her real life as well.

You've mentioned that for you it's about finding power and confidence. When did you discover it and how did you know it was for you?
I guess I touched on that a bit in your previous question, but it was in the late '80s and early '90s. I always remember my first moment with red lipstick and a curling iron, it really was a revelation! You know, in the '80s we were all going around wearing that foiled-peach lipstick color. It wasn’t always easy, and I remember being ridiculed a lot in the early '90s going out on a normal day, wearing vintage clothes with my hair in a 1940s pompadour, with red lipstick. People were always questioning why I was dressed like that. I didn’t really have any modern examples of people living their lives like this.

Tell us a little bit about the artists joining you in the show.
I haven’t confirmed all of the cast yet, but I’m pleased to say that we are bringing the show-stopping Dirty Martini, and Australia’s own Zelia Rose. I’m bringing a few new faces as well, but I’m holding back on announcing that for a bit still. . . 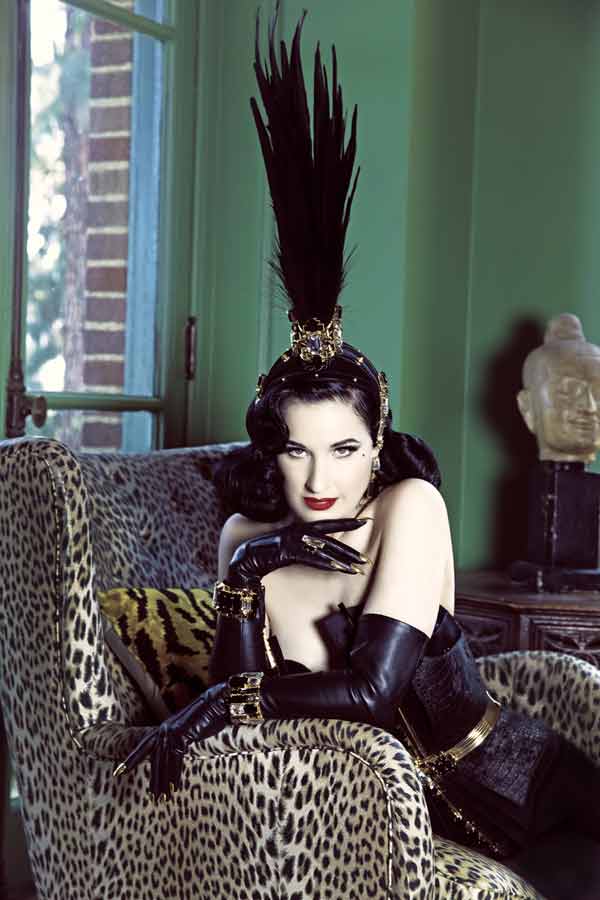 What kind of involvement do you have in picking the fashion for 'Glamonatrix'?
I style all my performances in the show. I am the sole producer, both financially and aesthetically of these tours. I do have some close collaborators, like Catherine D’Lish, but this has always been a show where I put my obsessions and fantasies on the stage. I finance and produce a show myself and I work with individual people on certain aspects of the shows. I still maintain complete control over all the clothes I wear in the show. It’s a bit like putting a puzzle together, I tap into different creators for different things, and then it all comes together. Just to give an example, the shoes will come from Louboutin and we will do multiple fittings for each pair. The stockings are made by my signature stocking brand, so I’ll tell them something like “can you make black stockings with a red seam and French heels, and beige stockings with a gold seam and Cuban heels”. Then I’ll usually have the bras and underwear made in one place, corsets would be made by either Mister Pearl or by Dark Garden, and I’ll usually send them the fabric for that. Hats might come from Stephen Jones or Adele Mildred, and I’ll always send some kind of reference for that, maybe a picture of a vintage hat I have, and I’ll take measurements of it and show where to make it bigger and where to make it smaller. So this is just an example how it goes, lots of different hands on different components, and then, hopefully it comes together and it’s magical!

'The Art Of The Teese' is the most successful burlesque tour of all time. Why do you think this is?
I don’t know, I guess it’s not hard to have the biggest burlesque show of all time, there hasn’t been a whole lot of competition for that sort of thing in the last 75 years! I’m friends with Gypsy Rose Lee's son and I’ve seen his home movies of what her tours were like. On one hand she was super smart – she made a fortune touring, but that’s because she had hardly any production. The reality is those productions were very rough. She had beautiful clothes made by her friends like Charles James, but it was definitely a no-frills show. I tend to spend a lot more than I should, but I really don’t see the point in doing things any other way than to raise the bar for burlesque and do things that make me excited. It’s probably not the best business decision, so I’m not buying Rockefeller’s apartments or palatial Beverly Hills Estates like Gypsy was, but I’m proud of the production and all the amazing places we’ve been able to bring the revue.

Is there anything about Australian audience that you love compared to audiences elsewhere?
Australia holds a very special place in my heart because my first international tour was Australia! So having people come out to my show, selling out that first tour really paved the way for me to prove myself and able to bring this show to other parts of the world. I always feel especially grateful being there and I think they really love burlesque. They also have a discerning eye for it, so I always want to be at my very best for them!