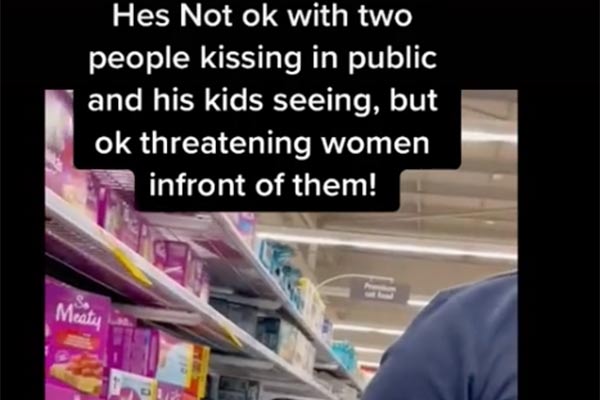 A Man Confronted Two Women For Kissing In Coles And. . . This Is Seriously Still Happening?!

A woman has recorded an instance of a man berating her and her girlfriend for kissing in the middle of a Coles supermarket in Melbourne.

The video, which has amassed more than 200,000 plays on Tik Tok, begins with the man, a father, saying “I choose what I want my kids to see”.

“In a shopping centre, I’d like to see a nice, calm environment,” he continues.

According to news.com.au, Anueta Madison-Vanderbuilt (@its_anueta on Tik Tok) says her partner joined her in the supermarket with a coffee, prompting her to thank her with a “quick kiss” on the lips. Soon after, they heard a man speaking in a raised voice and soon realised he was directing his comments at them.

The man was telling them to ‘calm down’ before Anueta hit record on her phone.

“If you’re still recording, I’ll actually snap your phone,” the man is heard saying before reaching out to snatch it from Anueta.

Since posting the video yesterday, Anueta has responded to a handful of comments, both positive and negative, relating to the incident.

Recorded for our safety. I have 3 kids & can’t believe he did this in front of his! #homophobe ##tiktokhelp ##lgbtq ##loveislove ##mama ##queer ##melbourne

“I just finished my Bachelor Of Social Science and I majored in Behavioural Studies, and how children grow up seeing good role models of what a good relationship is, and love and affection and that sort of thing. . .  We literally just kissed,” Anueta says in one of her recent clips. “It wasn’t anything graphic. We literally just kissed no where near him. He was the one who was walking past us.”

One commenter wasn’t shy about stating that they felt homosexuality had been “normalised by sick, perverted ideology” and Anueta didn’t hold back in her video response.

“If your job is in your bio, or in your Instagram, or linked somewhere on your page, I will most definitely be sending [your comment] to that workplace, because here in Australia we have laws, and those laws protect people from homophobic comments on the internet.

“If you’re willing to put your name, and your face, and your photo, to homophobic commentary, and post that publicly on social media, I will report you, I will send it to the appropriate places, you will be found.”

Anueta told news.com.au that police are now investigating the incident.