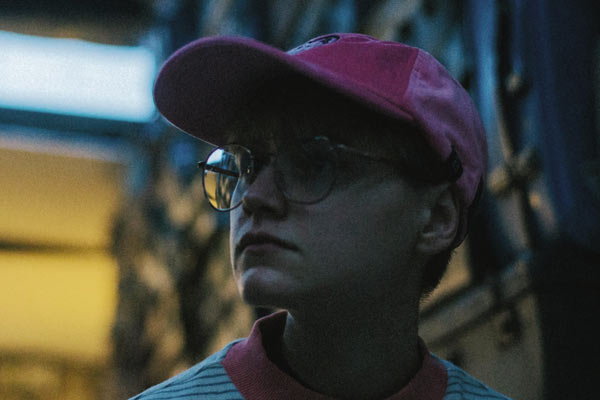 'Circles' is as much about growing, and accepting personal truths, as it is about finding the confidence to share those truths with those close to us.

The vocals in the track – provided by Priscilla Gardner, paint a picture of a boy who is cycling the neighbourhood, afraid to go home and face the reality and inevitability of coming out.

'Circles' is completed by a driving bass line and lush synth production.

Here, Priscilla answers some questions about the track, and the themes it encompasses.

This new track embraces vulnerability. How so?
This song was written at a time in my life when I felt powerless. It had come to the point where I could no longer 'hide' the fact I was gay – and greater society had started treating me differently because of it. It explores vulnerability because that’s literally how I felt, experiencing prejudice and bigotry for the first time in a real way. Writing these lyrics was a way of coping during these moments, and it is basically putting forward the question I had in my head “when I tell my family and friends, would they still support me?”. It represents that unknown factor. Thankfully I had a really good experience with those closest to me, and a lot of people don’t have that so I am very grateful for that.

Why did you decide to take on a song with these themes?
It wasn’t really a decision, it kind of just happened. Songwriting was so hard for me before I came out (even to myself). Writing music can be such a personal thing and when not living honestly I found it really hard to express myself creatively. This song has been the easiest to ever write because it is literally just a release of those emotions. That’s all I want to do with music now – is explore that.

Why do you think music like this is important in 2019?
I think any sort of representation of a minority is important. For me, it was such a drive and inspiration to see openly queer people gain influence in the music industry for representing their experiences. It tells people that success is available to those who are not in the majority.

Do you have any thoughts about the music industry in 2019 as a queer person?
My thoughts are that it’s changing, we have definitely come a long way but it’s not enough. There is still such a gender disparity in the industry, and we are seeing more and more visibility being drawn to that issue with people supporting female and gender nonconforming musicians. The same goes for queer people – having mainstream art actually be a representation of all the humans that live on this earth is a very exciting prospect – we need to keep supporting artists that resonate with us and show that this is what people want. I feel very grateful to be able to step out on stage as myself, and be supported for that. It’s very exciting, and I want to see where that goes from here.

What is your favourite thing about being a musician?
Getting to write and perform with my main man Luke Minness! He is like a brother to me and the best co-writer I could ever ask for.

And what is your favourite thing about being a part of the queer community?
Probably the idea of shared experience. Obviously everyone’s journey is different but I so often find that when I meet folks from the queer community there’s this intangible bond over the fact that we share some of the same experiences. There’s this feeling of solidarity I get there that only exists with people from the queer community. There’s been a few times after our shows where queer folks have come to chat about how much certain songs mean to them, and how seeing me up on stage just being me when they were going through their own journey helped them – it’s very special and an honour to help folks in that small way.

You're not far from supporting Art Vs Science on a string of dates. What can audiences expect from you there?
Changing up our set a little bit, finishing off some new songs and always practising new dance moves – so there’s plenty there to see, haha! We are constantly working on making our live set more of an experience, so it’s always a work in progress!

Do you hope to explore themes similar to those in 'Circles' in future music?
‘Circles’ is about a very specific event in my life so we probably won’t go quite back there again but it’s likely similar themes will come up, as it’s just my life. I hope to just keep being true to myself and writing good music! I wanna be someone who writes killer music, who also happens to be queer.