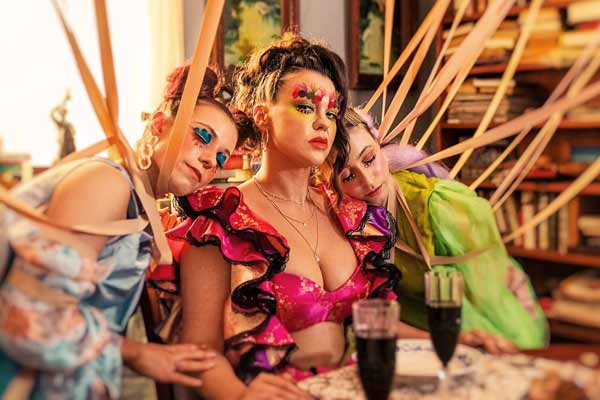 'Gypsy Dreams' is a moody, dark-pop track, with vocals reminiscent of The Pussycat Dolls' Nicole Scherzinger. It was born from a dark time in Zelie's life when she made the decision to pursue a living spirit of zest and say goodbye to the depressive state she found herself living in.

“At the time I was having vivid dreams, some good. . . Some not so favourable,” Zelie tells FROOTY. “I wanted to understand the messages behind my dreams and find a meaning or a link to my daily life.

"I took the time to study the complexities of the messages I was getting by reading and interpreting my dreams through books and online sources.

“Whilst having these intense dark yet beautiful dreams I learnt a lot about R.E.M (Rapid Eye Movement) which inspired me to write ‘Gypsy Dreams’.”

And so, with a clear inspiration for the new track, Zelie began to craft, working her musical magic and attempting to put the vividness of dreams into words. The song was written alongside Justine Eltakchi.

“We really wanted to elaborate on the intensive kind of visuals you can get when dreaming with underlying metaphors behind the descriptive lyrics. When working with producer Joseph de la Hoyde we delved into a dark-pop vibe and implemented subtle yet peculiar sounds.”

Along with the track, which FROOTY is positively thrilled to be premiering a day early, Zelie is also dropping a mystifying music video to accompany it.

Check it out exclusively below.

“I teamed up with Director Kezia Suryaputra, we had so much fun creating the concept and visual inspiration behind ‘Gypsy Dreams’,” Zelie describes. “I confided in Kezia giving her a deeper understanding of my journey and thought process during that time in my life. It broadened the opportunity for her to see the bigger picture. . . The underlying message.”

The video is set in a Victorian house from the 1800s, where two characters are bound to the strings which enslave them – before Zelie's character enters to set them free.

“Kez and I want people to understand this is more than just a music video; more than just an artist singing a single,” Zelie continues. “Ultimately this is about choosing life and freedom.”

“No matter where you are in life, even the messiest valley, there is still goodness that can be offered to you. Goodness can and will come to you – if you make the right choices.”