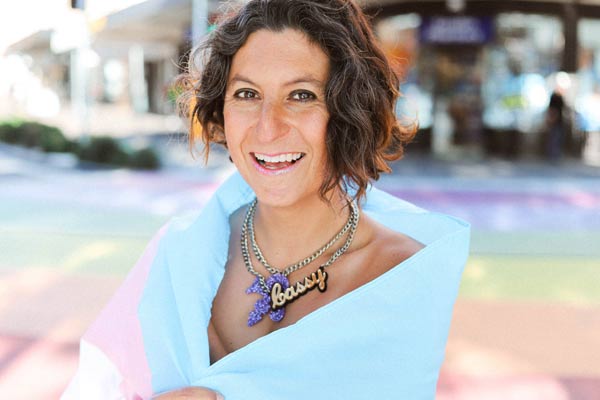 Premiere: Watch Cassy Judy's New Music Video 'Too Much East In The Nor'Easter'

"A woman's place is on her surfboard!"

Pop/folk artist and proud transgender woman Cassy Judy is an ocean adventurer by morning, criminal lawyer by day, and musician by night.

Cassy is influenced and inspired by a range of performers including Prince, Dave Graney, Amber Lawrence and Julia Michaels.

In her new track 'Too Much East In The Nor'Easter', written earlier in Cassy's transition, she sings about sharks, women in surfing, and those days when it's just too windy to surf!

FROOTY is amped to be premiering the accompanying music video today.

Directed by Matt Weissel, the music video is set on and around Maroubra Beach, displaying the beauty of the sand and surf while Cassy scales rocks and a giant Rubik's cube, and plays her guitar.

There are also a few sneaky little cameos in the clip.

"One of the definite highlights of the recording of the song for me was getting my producer Derek Turner's girls, Hayley and Alannah, involved in the song and in the video!" Cassy says.

"The old saying is 'never work with children or animals' but finding ways to include them in the song was tremendous fun!

"Having Claire Iver (bass, backing vocals) in the track too was awesome – it's just like singing with an angel who also happens to ride a motorbike!"

Cassy describes the experience of shooting the video, which kicked off first thing in the morning.

"I was in the water at 6am! I'm a rugged all-year-round swimmer. The first part is the hardest but after that your body adjusts to the water temperature. . . Or at least mine does," Cassy admits.

"It was a cold day. By the time we were filming the shots on top of the cube I was shivering. The cube sits on top of the drain and a draft of warm air was coming out of it. . . Providing sweet relief! Filming with Matt Weissel was a lot of fun as Matt's style is very collaborative and easygoing."

"It was fabulous to get the Coobras (my local swimming group) involved. I gain a lot of friendship and community from the Coobras, and succour and adventure from the ocean, so it was fitting to film at Maroubra for that reason."