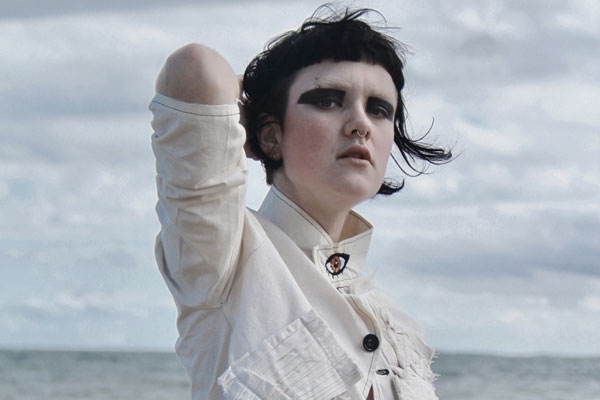 'Swallow Me Whole' is the debut album from Sydney singer-songwriter/ producer Lupa J, and a record that brings us a little closer to knowing the enigmatic young artist on a more intimate level.

On 'Swallow Me Whole', Lupa shares with listeners her own story of self-realisation and self-acceptance through music. Focusing on feelings associated with newfound desire, Lupa delves into her experiences with coming to terms with hurtful relationships as well as her own queer identity.

Lupa kindly answers our questions about the album and its core themes, her dream collaboration and the pesky tag of 'goth-pop' that keeps following her around.

What did you want to achieve with your debut album 'Swallow Me Whole'?
Prior to writing 'Swallow Me Whole' I had released three EPs, and with the most recent two I had really focussed on trying to write more cohesive, long-form bodies of music, as opposed to throwing a bunch of singles together. So with this album, I was keen to push that as far as I could, almost approaching it like writing a concept album. I hadn’t written anything new in a while, I just had a few notes on my phone of lyric ideas and an outline of the ‘themes’, which all came together quite naturally as I was writing about a very specific turning point in my life. I also decided that if I was to write a cohesive album I needed to be writing multiple tracks at once, because in the past I would spend ages polishing one song at a time, and the whole thing would take longer and feel more disconnected.

What is the most important thing about 'Swallow Me Whole' you'd like audiences to know?
I think the themes of the album are all pretty clear when you listen through and watch the accompanying music videos. So if anything, I’d just want people to know that everything I wrote about was entirely real and deeply personal, and that it was a really therapeutic process for me to work through my emotions by writing about them like that. And in saying that, I would want people to know that the escapist, reckless and desire-filled state of mind I was trying to write about in a lot of those songs is not necessarily something I look back on fondly; I definitely didn’t have everything worked out! But it was through writing about it that I was able to actually confront those feelings and see what needed to change in my life, and then eventually take action and start working things out. So if people can take anything away from it, I’d like it to be that confronting painful emotion – especially creatively – can be very, very cathartic.

The album marks your own creative development as an artist – in your eyes, how have you noticed your songwriting evolve?
I think with this album, I really pushed every aspect of my sound and style to their extremes; it contains the most pop-driven music I’ve ever written, but at the same time on other tracks I went all-out with experimentation, testing out my ability to integrate industrial techno into my production style on tracks like 'Swallow Me Whole'. I think having the freedom of writing 12 tracks gave me a lot of room to try stuff out that I hadn’t had before.


Is there a theme that unifies the songs on the album?
Definitely. It was a very personal writing process about a very specific turning point in my life, and so, as I touched on earlier, I ended up just naturally writing on a theme. The record is called 'Swallow Me Whole' because overall I was writing a lot about desire, escapism and recklessness. It’s about a period of time where I was realising more and more that I had a lot of previously unrecognised queer desire that I wanted to explore, but I didn’t yet know how to leave my long-term straight relationship. There was a major dissonance between what I wanted and how I was living, and in order to cope with it I had this intense desire to throw myself into new and risky situations, to feel completely consumed by something – a person, emotion, desire, intoxication – anything that wasn't my reality. So I would say there’s definitely either an element of danger or desire (or both) in most tracks.

The album's lead single 'Woman' – can you tell us about how the song came to be?
‘Woman’ was one of the earlier tracks I wrote for the album and as you can probably hear, it more or less outlined what the album was going to be focused around. I kind of see it as the ‘punchline’ track to the album, if that makes sense. All the other songs kind of dance around the point a bit whereas in this one I just go out and say it - literally opening the track with “I want to love a woman”. It was scary to write but once I had, I could kind of follow on from it and explore the feelings further. It’s a very happy sounding song on what is largely a very dark album. I guess ultimately all the more emotionally complex and fraught tracks stem from this very basic cathartic realisation - that I was capable of loving a woman, and that maybe a lot of the issues I had in straight relationships would dissipate if only I was with someone who had an experience of living with a body like my own. I think I may have written those lyrics as soon as that thought fully crystallised in my head for the first time; I wrote them all at once, very quickly.

How has coming to terms with your own queer identity influenced your creative process?
Well, it gave me an entire album’s worth of content for one! I’ve always written about issues in my personal life but because this was such an intense and complicated realisation, it forced me to deal more directly and vulnerably with emotion in my music than I ever had before. That was the only way I could honestly and holistically tell this story and process my feelings around it. It’s made me realise that people really connect to vulnerability; playing ‘Woman’ at shows always gets a few cheers mid-track when people realise what I’m singing about, which had never happened to me before.

Working with Chloe de Brito on the video for 'Woman' – how did she facilitate bringing your vision to life?
Working with Chloe was really important in terms of just actually making the ideas in my head work. I knew I wanted a video filled with heaps of queer women portrayed very honestly, but actually coming up with ideas on the day of how to make us all feel comfortable - ways to move, scenes to create, a colour scheme to unify us etc. - would have been very difficult without the help of Chloe.

What is the biggest stand-out moment of your career as Lupa J thus far?
For a long time I reckon I would have said opening for Grimes in 2016, which is still a major, major highlight for me. But now I think I have to say it would be writing and releasing this album and making all the videos that went into it. In particular, finishing and releasing the video for ‘The Crash’ was an amazing moment - I’ve never had a vision for a song and a music video so thoroughly executed. Normally when I make videos it ends up as a simpler, more ‘affordable’ version of my original idea, but the finished song and video for ‘The Crash’ encapsulates everything I was imagining and more from the moment I finished my first demo of the song. I stood by my vision for the video, and the grant I received from the Arts Council allowed me to do everything I had dreamed of doing with it.


If you could co-write with any musician/s living or dead, who would it be and why? (And what would that song sound like?)
I think maybe Arca - I absolutely LOVE the collaboration between FKA Twigs and Arca on her ‘EP2’. tracks like ‘How’s That’ and ‘Papi Pacify’ are phenomenal; I could absolutely imagine me and Arca making something like that, but maybe also more influenced by his more aggressive/ industrial sounding recent work.

Are you comfortable with the 'goth-pop' tag or is it just a convenient way for people to label your music?
At first when people started using it in reviews etc I thought it was kind of funny, since I had added the ‘goth dream pop’ tagline to my Instagram bio as a sort of self-referential joke (I make dark electronic music and have an ‘alternative’ haircut and fashion sense, what else could I be?) But now it’s reached a point where I’ve heard people describe songs like ‘Woman’ and ‘You’re In My Headphones’ as ‘goth pop’ on air and I mean those are just definitely NOT goth at all, they’re some of the brightest tracks I’ve made.

When do Australian audiences get to see you strut your stuff onstage?
August 2 at Oxford Art Factory Gallery Bar in Sydney and August 10 at Horse Bazaar in Melbourne!

With the debut album done, what comes next for Lupa J?
Hopefully many more shows, but most of all I’m just keen AF to start writing new stuff again. I’m also excited to get into producing for other artists now too!

'Swallow Me Whole' is out now.