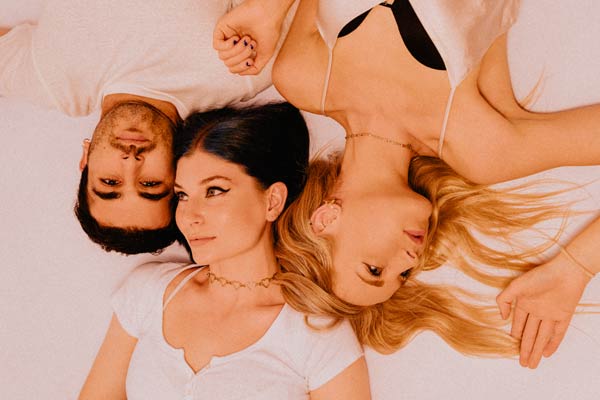 Introducing Sarah Wolfe Before New Single '100 Times' With The Flowers

Sydney indie-pop artist Sarah Wolfe has teamed up with triple j newcomers The Flowers for '100 Times'.

The track, produced by Sarah's partner Xavier Dunn and written alongside frontwoman of The Flowers – and Sarah's best friend – Aggy, is a heartfelt collaboration and nostalgically poppy. It's released on 4 June.

Recently coming out as bisexual, Sarah is keen to find like-minded people within the queer community. What better way to welcome her into our global family than getting to know her a little better?

Check out some music by Sarah Wolfe below, and a bit of background on Sarah, below.

I sound like... My sound is kind of in a warping phase! Whoops. It used to be a Charli XCX vibe, now it is leaning more towards Mark Ronson-y and Amy Winehouse-y!

My first gig was... Thirsty Merc at The Metro!

If there was one queer artist I could add to a festival line-up to make it better it would be... imbi!

In the studio I usually... Play with my cat! The studio is my lounge room.

If I could tour with anyone... Dua Lipa or Mark Ronson.

Social media is... A place to explore art, but also a place to be careful.

My gay crush growing up was... Ashley Greene as Alice Cullen in 'Twilight'.

My most embarrassing moment to date was the time... When I had just started a new job and I was SUPER nervous. I went to the bathroom and it doesn’t have a toilet roll holder, so I was holding the entire roll and instead of throwing in the bit that I wiped with, I threw the entire full roll into the toilet.

The most scary scenario I've found myself in was... The Scooby Doo ride at Movie World when I was nine. Anyone that has been on that ride will know…

Which celebrity/famous person would you love to be spokesperson for you... Kacey Musgraves.

Three queer celebrities from any field you'd invite around for a dinner party would be... Halsey, Janelle Monáe, and Kehlani.

If we came to your place, what would you cook us? Vegetarian Bolognese! And the really cheap garlic bread from Woolies because I have taste.

No matter the expense, send me a case of... Nikka Whisky from the Barrel.

The best thing about being part of the queer community is... The art that comes out of it! So many of the world’s favourite shows/movies/music are conceptualised and brought together by people from the queer community, the arts would not be the same without them.

If you could tell your younger self one thing, it would be... The things I’m worried about will seem insignificant in a year, so stop overthinking and go do the things you love!

If you could tell young, aspiring queer artists one thing, it would be... Write music for you, not to please others. Whatever you love to make is beautiful.

What chore do you dislike the most? Washing the dishes! I’ll take drying them up after a million times over that.

Do you have any phobias? Claymation.

Would you ever partake in a reality show? Depends on the type!

If you could prank any of your friends, who is your target and how are you bringing them down? I would prank Aggy from The Flowers by telling her I disapproved of her ordering a $50 scrunchy from Camilla.