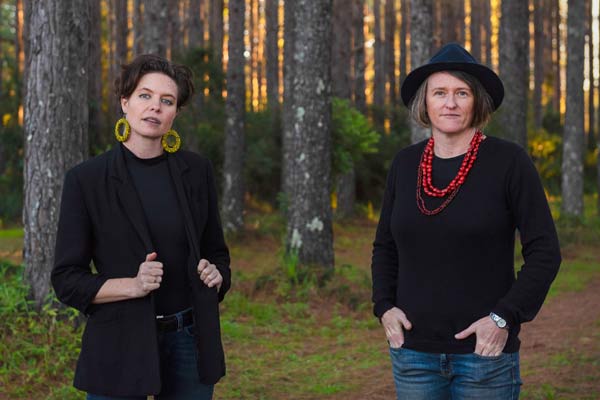 Singer-songwriter Leesa Gentz and guitarist Julz Parker are blues 'n' roots band, Hussy Hicks – and their new album 'Gather Up The People' will be available for us all to enjoy.

With 13 years' experience in the industry, Hussy Hicks have played more than 1,000 live shows from some of Australia's biggest blues, roots and folk festivals to 15 international tours.

'Gather Up The People' features more than 20 collaborators from across the world and home, with singles 'Get Ready' and 'Mountain Peak' already hitting the airwaves.

With live (yes, in a venue, on a stage! Finally!) shows on the horizon including Bluesfest 2021, Hussy Hicks are preparing to release their most personal work to date into the world.

Here, we sit down with Leesa and Julz to chat all things music, live gigs, the queer community, and managing to gather up the people in a time where it seems impossible.

Tell us a little bit about the new album.
Julz: After our last studio-centric album, 'On The Boundaries', we wanted to make an album that really honoured the sound of our live band playing together, because we’re really a live performance band. I did most of the engineering and production, so we were able to take our time when recording in the studio and on the road during our world tour last year. The album really centres on togetherness and goes from folk, to rock, to soul and back again. We know it will be a whole lot of fun to play live!

Some of the songs are the most personal of yours to date. Did that happen organically or did you aspire to get a bit more personal with this work?
Julz: I think it was quite organic. We have been in an emotionally-charged place in the last few years, where truth is something we really strive for. I guess that may have helped more personal themes to come through when we were writing the album.
Leesa: This body of work is incredibly personal for me. I feel like I've allowed myself to be more exposed and more honest than on past albums. Perhaps it's part of growing older and learning to accept, and even celebrate, the things that I once kept hidden away.
The song 'Hid Myself' is exactly about that – hiding away the parts of yourself that you think other people may find confronting, but realising that it's much more important to honour your truth than to change to make others comfortable. Learning to be happy within yourself isn't the easiest thing to achieve, but for me it's something that's really worth working towards. I feel that I'm getting better at it with each year that passes. I hope that I can continue to write from a place that's very genuine and open, and share more about myself with our audience. 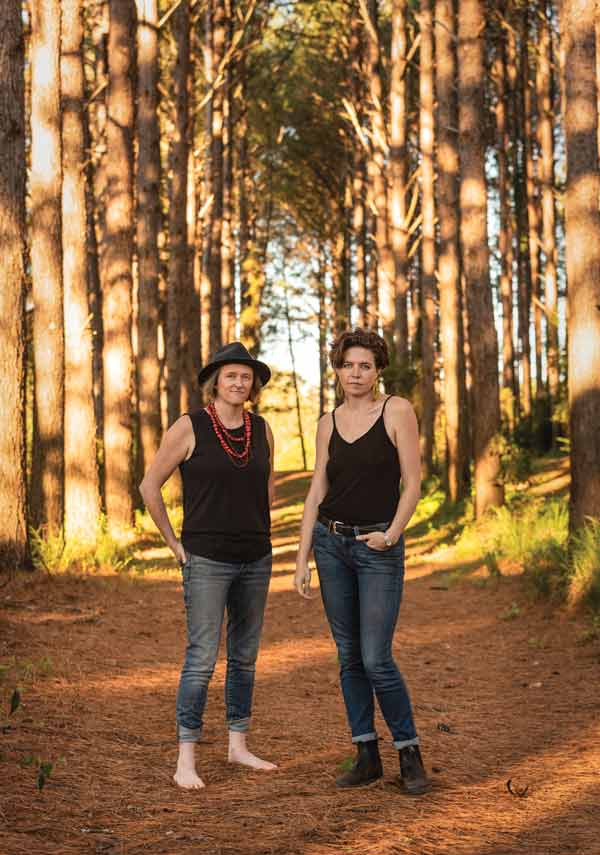 Hussy Hicks is playing some intimate shows in August, and then Bluesfest next year! What can fans who haven't been to a Hussy Hicks show, expect from your sets?
Leesa: I'm unbelievably excited to play our first shows in over four months, I plan to enjoy every moment of every show and sing and play my heart out. If you've never seen us play before then the first thing you need to know is that watching Julz Parker play the guitar is a mind-blowing experience. She is one of the most creative musicians on the planet and you never know what she's likely to do next. Then we have our incredible rhythm section – Tracy Stephens on bass and Ali Foster on drums – these women are exceptional and I can't believe I get to play music with them all! As for me, I'll be shaking and hitting percussive things, jumping around on stage and singing my heart out, that's pretty much my all-time happy place!
Julz: Exactly. We absolutely love playing live as a band and I think that shines through in our live sets!

How important is it to you as a band with queer members on a platform to be a positive representation of the LGBTQIA+ community?
Julz: Trying not to be a dickhead as best you can is important no matter who you are or how you identify. If people have a prejudice against you, then they will always find a way to fault you.
I think the best we can do for the community is just be ourselves and be visible. We have spent the past 13 years travelling the world playing music and found ourselves navigating all sorts of different environments.
On one tour we had people picketing in protest of our Florida show with Kristy Lee, telling us we're going to hell; then we’ve also been guests of honour for a Christian community youth group. We always just try to connect with people on a person-to-person level and hope that once someone can see you as a person, they may stop seeing their prejudice. This whole theme is a big part of the album – “The things we share are greater than the things that keep us divided”.
Leesa: I think that presenting ourselves publicly as artists and being as true to our music and our creative selves as we can is the most important thing and the best way to represent our community. We've always been really blessed to have strong LGBTQIA+ community support. I feel grateful to exist amidst this wonderful, creative, colourful and inspiring group of people and I hope to be able to inspire and support creatives in the community in any way that I can.

Do you have advice for any queer aspiring musicians who might be feeling intimidated by the industry because of their sexuality/how they identify?
Julz: Music is intrinsically a place where gender, sexuality, race, socio-economic factors and everything else doesn't really matter. You can jam with someone who doesn't speak a word of the same language and communicate for hours. I think because of this, music is often attractive to those of us who don’t feel like they fit in with 'normal' mainstream society.
My advice to anyone feeling intimidated by the industry because of how they identify is to just keep making music, going to shows and finding people you click with. The industry is made up of so many different styles of people who have mostly all ended up there through a basic love of music. Go see bands you like, try and find the people that you naturally connect with, don't be scared, have fun. You'll find most people connected to music are pretty tolerant and welcoming to anyone that is also excited about making the music that they want to make.
Leesa: The first thing to remember when you're feeling intimidated is: you don't have to apologise for who you are. The music industry is a tricky game, but we've managed to exist on its fringes for many years now. As an independent band we get to call our own shots, so we choose to work with people who are open-minded, kind hearted and wildly creative. Keep this in mind when choosing your team and follow your instincts to ensure your creative network is aligned to the same general values as you. Life is way too short to waste on people who want you to be something that you're not.

'Gather Up The People' will be your sixth album. What is one thing you have learnt from previous releases that you have applied to this new album?
Julz: We really focused on enjoyment when making this album. We had quite a lot of access to the Gold Coast’s Lovestreet Studios, so we made a conscious decision not to push things. If we felt we weren't vibing on something or were feeling a bit brain-strained, we stopped. We have so many hours of recording because we really let ourselves play around with all the songs and just see what felt best. We'd take a basic idea to the studio and see what it grew into with our band and co-writers, Tracy Stephens, Ali Foster and Raph White.

You're pretty used to playing lots of live shows any given year. What have you been up to over the last few months while that hasn't been possible?
Julz: We spent most of the lockdown at our river cabin studio in the Northern Rivers. We were just back from the USA and in the middle of a tour when it all got shut down, so instead of hectically doing a run of shows in preparation for an album launch at Bluesfest, we basically staved off insanity by trying to create outdoor projects during the day and recording music at night. We ended up recording a whole other album during the nights we were in full lockdown. I’m not sure if it will ever see the outside world, but it kept us alive at the time.
More recently we've been really lucky to have Leesa's dad come down and help us extend the studio space, so we've been learning some building skills. Our whole year was booked with large festival gigs and overseas tours so it was a massive blow. We would have been in Canada right now playing Mariposa (one of their largest folk festivals) for the first time. We still have two European tours booked for the end of the year, but it’s looking increasingly unlikely they will go ahead. We decided that we didn't want to wait until we could do a full tour to release 'Gather Up The People', so we've booked a run of intimate shows at our favourite east coast venues and we’re keeping our fingers crossed that things don't go back into lockdown. Who could have known that 'Gather Up The People' would be such a controversial mantra?

What has been your favourite part about putting 'Gather Up The People' together?
Julz: Spending our time making music with friends is our favourite thing. Watching all the little ideas grow into an album of finished songs that have pieces of everyone’s creativity brings us so much joy.
Leesa: The whole project has been a wonderfully creative ride. We've made music with friends in studios and makeshift recording spaces all over the world and it's been so great to just ride the wave of this body of work. Julz is obviously the one who has put in hundreds of hours making it into a finished piece of work, but for me the whole process has been so much fun!