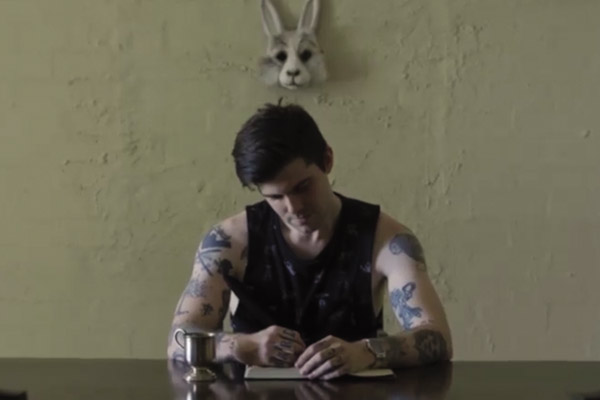 Brisbane-based band Bard Of Brunswick recently dropped their single 'Coming Home', a track about waiting for that special someone to arrive.

Along with the catchy song and its sweet lyrics (“good things come in twos, are you coming home soon?”) is an equally charming music video further bringing the concept to life.

It depicts an owl gathering his forest friends together for a tea party in the hopes they'll find love among each other – displaying not only a beautiful, selfless act but also the boundless experience of love in all of its forms.

The video's Creator Chad St James saw the opportunity to explore diversity in gender and sexuality. Director Anthony Stone and Cameraman Ethan Bourke – as well as the cast, made up of many queer Brisbane folk – donated their free time to be part of the project. It was shot at The Brookfield Retreat, who welcomed the idea with open arms.

“It's not often one of your favourite Brisbane musicians asks you to create a music video for their latest single. When Bard Of Brunswick frontman Brendan asked me to do this for his single 'Coming Home,' it was too good of an opportunity to pass up.

'Coming Home' is about not giving up on love when it doesn't work out, but remaining hopeful that 'the one' for you is still out there, and it's just a matter of time. It's a universal message that we can all relate with. Because of this, I wanted to create something that not only celebrated the beautiful love song that is 'Coming Home' but also celebrated love in all its diversity.

Like so many creative ideas, the concept of the video came about over a few beers. 'Wind In The Willows' and speed dating. It was different, out there, and Brendan was all for it. It wasn't until after seeking the amazing makeup talents of Tia-Louise Thompson, better known in the Brisbane drag community as Solar Flair, that the concept took on an even more significant evolution.

To celebrate love in all its diversity, it wasn't just enough that the woodland creatures would end up pairing with what would probably be their complete opposite in the wild, the cast had to be diverse as well. As a gay man, I realised there was an opportunity, as subtle as it was, to celebrate diversity and inclusiveness. Teaming up with Tia, that's what we went out to achieve when deciding that the cast would be made up of mixed genders and sexualities.

Was the everyday person going to pick up on this subtle addition? Probably not. But for those that did, just maybe it would cement the fact that with our differences aside, we're all just a bunch of crazy little creatures of different sexualities and genders trying to make connections.”

'Coming Home' and its accompanying music video are out now.