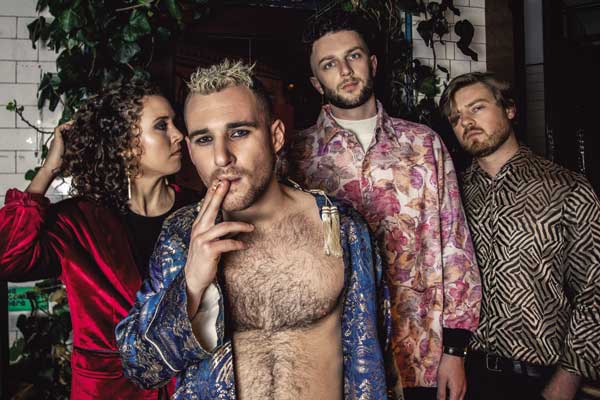 Alae: 5 Ways To Be Okay With Things And Get On With Stuff

One year on from debut album 'Henry St', indie pop band Alae return with a springtime banger and video to match.

The Auckland group hit up five of New Zealand's top directors for the 'Hit Me Where It Hurts' video, which paints a picture of a one-sided love story on a canvas of slick pop music.

It's the first taste from Alae's partnership with Canadian producer Justin Gray and Anti Gravity Records. . . A self-assured, liberated bop ready for you to dance to.

With lead singer Alex Farrell-Davey now fully embracing his queer identity in this, the group's new era, it feels only fitting that they list five ways to be okay with things and get on with stuff.

Mental health is huge. Just because we can’t actively watch our brain as it gets out of shape, doesn’t mean there’s nothing we can do to maintain its wellbeing. A lot of people struggle with anxiety and depression, which leads to insecurity, projection and lots of other nasty things. So – be self-aware and be patient with others. People are sensitive and often don’t know how much they impact one another. Know your triggers and learn how to manage your reactions. Being aware of this, will help you to become a better person.

Exercise regularly. You don’t have to be shredded, but you have to exercise! Beautiful people are plastered everywhere, all over our cities, all over our screens, throughout our god damn dreams! To avoid the apathetic downward spiral that is wishing you were thinner, more buff, better looking – you have to know that you’re trying. Going out of your way to eat healthier and leading an active lifestyle is going to make you feel better and will change your perception of how you look.

Drugs suck (the happiness right outta ya). Drugs are both amazing and horrible. They allow you to borrow a week's worth of excitement for just a few hours. But that’s just it, if you’re taking them just know that the rest of the week will be sh.t. Is that trade-off worthwhile? You decide.

You do you. Normality is a concept built by insecure people that are scared of the things they don’t understand. Which seems f...ing ridiculous, because we can’t even explain what the hell we’re all doing here. Don’t let other people micromanage you. Do whatever makes you happy, dress how you want, love who you love, be who you want to be.

Effort is our satisfaction's currency. You get out what you put in. You know how sometimes things feel like they’re so close you can taste them, but you just can’t find your footing? Try a new approach, try something that might seem crazy, anything just try! The world isn’t out to get you, it wants you to succeed. It just wants you to earn it. Work your ass off and your goals will become your reality.

'Hit Me Where It Hurts' and its accompanying video are out now.