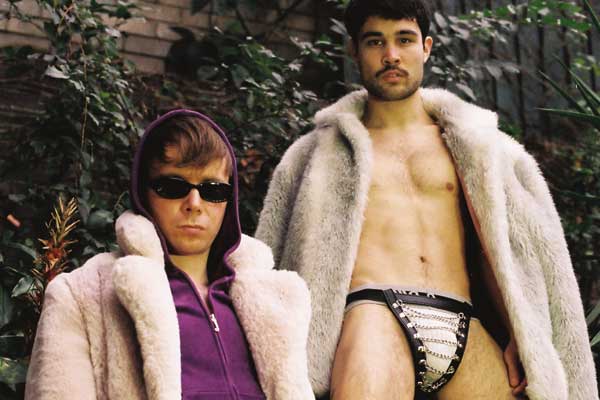 Electro-pop duo Collarbones (Marcus Whale, Travis Cook) are prepping for some live shows in conjunction with the recent release of their fourth album 'Futurity'.

Released on 6 September, the album explores highs and lows, morphing between electronic heavy-hitters and intimate ballads.

It's a genre-pushing dive into devotion and romantic hope for the future.

Some Guy Showed Up To Our Show Thinking We Were The Jon Spencer Blues Explosion.
Back in the summer of 2010/2011, we booked one too many consecutive shows at The Excelsior Hotel in Surry Hills so we had to make one a secret show under our alternative bandname Katy Perry Suppression Ring. One poor homophobic soul came to the show thinking we were the Jon Spencer Blues Explosion and, having expected a nice, patriarchal night of swampy rock music, promptly started heckling the wonderful Simo Soo who was on stage at the time. In what is, to this day, the most powerful example of crowd solidarity I've seen, the entire room shouted him down and, defeated, he slunk out of the room.

We Broke The Speakers At Our Album Launch And Still Had A Nice Time.
Also in 2011, the launch of our album 'Iconography' was held at Marrickville Bowling Club – because their system at the time was pretty poor, our friend Jono secured us a PA for the gig. The set began brilliantly. The room was packed and the walls were beginning to sweat when, tragically, the tweeters in the speakers blew out, rendering them unusable. We ended up finishing through the house system and in spite of it sounding terrible, everyone, who'd gone through the journey with us after all, went wild for every song in the rest of the set.

Someone Untied My Shoelaces Mid-Song.
I love crowd interaction as much as the next person so if someone's right at the front of a gig making eye contact with me, I tend to give them something back. I draw the line, however, at untying my goddamn shoelaces, which is what a girl at the front of a 2016 show at Oxford Art Factory did to me in the middle of singing one of our overwrought ballads. I was shocked, but mostly impressed at her gall. Not only did she untie my shoelaces, she tied them TO EACH OTHER. Kudos, sis, that's hilarious.

10,000 People Sang Happy Birthday.
Not quite a Collarbones show but a Flume set at FYF Fest at Los Angeles - I'd made an appearance singing his remix of our song 'Turning'. Having heard that it was my birthday, the sweetheart brought me back on stage afterwards to lead the crowd in singing me happy birthday. Harley's a genius musician but you could tell partway through the song that he regretted broadcasting that singing voice to the crowd. Cute though!

We Performed Dance Music To A Seated Audience.
You'd be surprised at how many fully-seated audiences we have performed to. All kinds of seats too - uncomfortable theatre seats, comfortable arm chairs, plastic stackable chairs, you name it. The highlight would have to be a show in a fully-lit bistro room at Coogee Diggers which had a single attendee.

Collarbones play The Curtin (Melbourne) 21 September and The Lansdowne (Sydney) 27 September. 'Futurity' is out now.