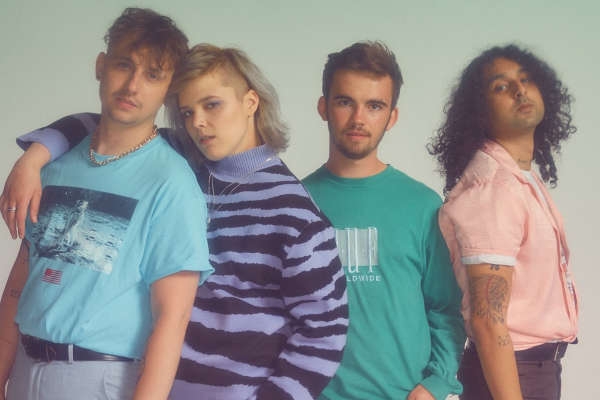 UK indie-rock outfit BLOXX, who have already released two stellar singles this year, are back with their new jam 'Off My Mind' – a groovy, melodic sing-along that will be stuck in your head instantly.

The song features on the group's debut album, 'Lie Out Loud'. "I think 'Off My Mind' is the most intimate on the record and maybe that I've ever written," singer-guitarist Fee says.

"It's definitely the most raw I've been in terms of descriptive content in lyricism. It's quite purely a song about sex and love. Who doesn't like that?

"I never assumed that I would write 'Off My Mind' about sex at all, so playing it to my parents for the first time when listening back to the record was sorta hard. I still cringe over it.

"In the wake of releasing our intensely fiery new single, I thought we could get a bit personal. So let me share my top 5 songs about sex.

"Obviously there's so many songs that are sensual and really beautiful about sex, but I'm immature and my humour stems from sex jokes so I'm picking all the songs about sex that attack it in a lighthearted way!"

"Can't miss this one off. Ha, it's our ONLY song about sex."

"I assume it's about eating chicken tenders straight after sex so. . ."

"All about secretive sex."

"Claaaassic! I hope this was a huge tune in Australia otherwise I look a fool!" [Ed's note: It was MASSIVE Fee; still is, ha!]

"Also, there's no right way for a woman in music to sing about sex is there?" adds Fee.

"It's either solely about sex which the world then paints badly or it's a taboo. . . that doesn't happen when men sing about it. But I give up with that stuff now.

"I'm going to sing about whatever the f... I want to. Penis or no penis. It's also interesting because I'm gay, so that adds a level of interest to the songs about sex I think, haha!"