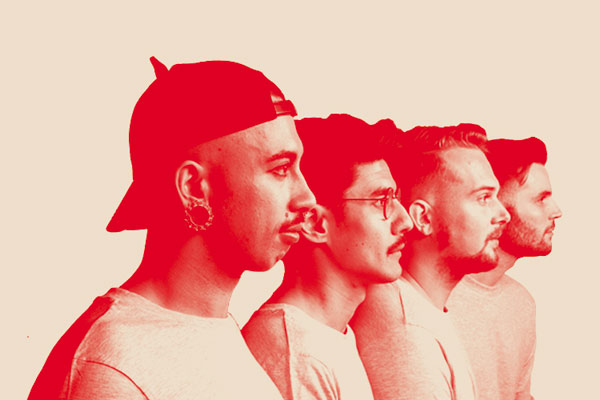 The Gays Are Revolting And On Air At Adelaide's Feast Festival

Thomas Jaspers can’t think of anything in his life that he would consider off limits for sharing.

Just over a year ago the podcast 'The Gays Are Revolting' was launched and it’s quickly found a loyal listenership who eagerly await the arrival of each weekly episode.

Thomas is one member of the quartet of gay men whose weekly discussions of politics, queer culture, controversies and community have captivated listeners around Australia. Each week Thomas, Myki, Luke and Kyle pepper the conversation with anecdotes of their own failings, aspirations and sexcapades.

“We’ve really covered a lot of different topics over the last year and a half, and I don’t think there’s anything that we haven’t talked about,” Thomas says, admitting that there’s nothing he’s afraid of sharing.

Over the past year as audiences have gotten to know the foursome, they’ve also been getting to know each other. When producers came up with the idea for the podcast they auditioned a range of potential hosts, including an open casting call.

“We did a massive pretend podcast with nine people so they could get to know our personalities, and who would fit well together and then they whittled it down to the final four,” Thomas explains.

Holding a four-way conversation was a challenge when the project first began, listening back to early episodes the crew often talk over each other, and forget to face the microphone when they get excited.

“We used to get really excited about something like 'Drag Race' UK, and start hyperventilating and talking over each other. Now we’ve learned each other's speech patterns and know when it’s each person’s time to talk,” Thomas explains.

Getting the tone right on a podcast is a challenging task though, and while Thomas isn’t sure why the group have achieved such great engagement, he says the presenters are very aware of how they come across.

“I think it’s important to ‘check your privilege’, and remember that you cannot speak on behalf of any other people in the community.

“From a very early stage we wanted to make it clear that this is a podcast made by gay cis-men for gay cis-men, and everyone else is welcome to listen to it. While we talk about things which are concerns for the other letters of the LGBTQIA+ rainbow we never speak on behalf of other parts of the community.

“I think the four different walks of life that we come from give the podcast a lot of authenticity, we’ve all got different experiences and viewpoints.”

Soon the team will head to the Feast Festival in Adelaide for their live show. Thomas says the live events are a lot of fun and a great chance to meet the podcast’s fans.

Heading into a live show, Thomas hopes a juicy topic will come up for discussion.

“I’m really hoping for some sort of gay controversy, if RuPaul could get into a punch-up with Michelle Visage in the next few days that could be really good for us.”

While they were strangers when they began their conversations, the four are now firm friends who catch up outside the recording sessions.

“We’ve opened up to each other on air so much, so there is a genuine friendship.”