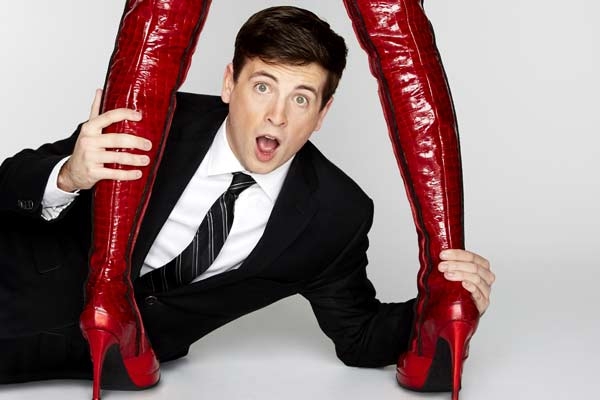 'Kinky Boots' is the new musical based on a true story which is warming hearts around the world.

Charlie Price is looking for a way to save the family shoe business when he meets a fashionable new friend who inspires him to try something new.

Here, Toby Francis (who plays Charlie in the current Australian production) answers some questions about the musical.

'Kinky Boots' is based on a true story. Tell us a bit about the plot of this show.
'Kinky Boots' is about a young man named Charlie Price who inherits a failing shoe factory from his father and, on a chance encounter in London, he meets a drag queen named Lola who inspires him to try and save the factory by making high quality, durable boots for drag queens. It's the kind of story you'd only ever hear about in the plot of a musical... Except that it's based on a true story.

You play Charlie Price. What are the challenges of playing this role?
Charlie has a hell of a journey to go on each night and spends about 90% of the show on stage. There's a big emotional arc to follow. It's also very vocally demanding. The songs are very high and there's a lot of dialogue. Act two in particular requires a lot with regard to the emotional and vocal demand it places on you as a performer. And that's really a lot of the job you do in rehearsals in a show like this: as much as it is about learning the lines and being told where to go in the scenes or learning the dance numbers, you also spend a lot of time getting used to the role and figuring out how you are going to give that performance eight shows a week, every week.

On the flipside, what are the best parts about playing him?
The things that are most challenging about playing Charlie are also the best parts about playing him. It's incredibly satisfying to be in the middle of those big scenes and hear that the audience is right there with you, it's an incredible feeling to get to the end of a massive number and hear an equally massive response from them. It feels like you're all in it together. Meeting the challenges of the role are the best onstage bits about playing Charlie every night but, backstage, the best bits are the company who are in this show. Everyone is meeting the challenges of their own roles and giving it everything on that stage every night. And we all get on like a house on fire. The best bits onstage are the hard bits, the best bits backstage are the people.

Is there anything about Charlie you can relate to on a personal level?
Absolutely. I think Charlie is who we all were at some point. He's a guy who doesn't know what he wants but knows what he doesn't want. And he goes from defining himself by the things he doesn't want to defining himself by the things he does which is something most of us go through.But his relationship with his father is something I absolutely relate to. This might sound navel-gazey but I really think that when we are young boys we see our fathers as these incredible faultless men and a big part of growing up is realising that they have flaws. It can be hard to reconcile that with yourself initially. I came out the other side of that realisation understanding that my father isn't an incredible faultless man, he's a flawed man like everyone else. But he's still incredible. It's a healthier, stronger relationship. You realise your father loves you just as much as he always has in spite of your faults, and you love him more because you now know his. For Charlie, he loses his father before they can have that relationship and he has to kind of figure out the transition by himself all while trying to save the factory, navigate the locals who are butting heads with Lola, and calculate how much glitter he'll need for the new sign out front...

Further from that, what kinds of lessons or messages in the show can audiences relate to or take away from it?
The biggest message in the show is also the title of the closing number: 'Just Be'. The show is about accepting someone as they come and finding common ground. It's only after you accept a person that you can help each other become better people. Our similarities are greater than our differences and our differences are generally pretty trivial. "That bloke wears a dress" isn't a good enough reason to have a problem with someone so just accept that some blokes wear dresses and move on. Once you get to know who someone is and move past the trivial stuff, they might introduce you to some cool music you haven't heard before or save your failing shoe factory.

Aside from being on the stage you've also dabbled in producing and writing. Do you prefer being part of a production team or being part of the show itself?
I honestly can't choose. I love performing but I also love a good spreadsheet. I think they complement each other well, producing and performing. Hopefully, producing makes me a less difficult actor and – again, hopefully – performing makes me a more involved producer. Doing both jobs you realise that no one is out to get anyone else in the industry, no one in an audition room wants anyone to fail, and everyone is on the same side working to the same goal: to make something great for audiences. The most important thing I've taken from performing and producing is it reminds me that no matter how much work I might be doing on any given day as a performer, there are a hundred people around me who got to the venue two hours before I did and they'll leave two hours after I do.

What do people love so much about this show? It's wildly successful.
'Kinky Boots' is super fun. I know I've had a bang on about Charlie's dad and the problems he faces in the show but it's funny and upbeat and people always end up dancing along at the end. They get up and sing the words to songs they haven't heard before – Cyndi Lauper can write a tune after all – and do the moves to dances they don't really know. It's infectious. It's a hard thing for a show to balance heart and a message like acceptance with fun and humour and audience enjoyment but that's what 'Kinky Boots' does brilliantly. It walks that line perfectly. And it does it in heels.

What's your favourite number to perform in 'Kinky Boots'?
'Soul Of A Man', definitely. It's Charlie's big number in act two and it comes after a massive scene in which he kind of goes to pieces. It's just me, alone, on stage by the end of it all, having screamed and stamped and made a right mess of everything. And then 'Soul Of A Man' starts. The song is Charlie's catharsis so it's an important moment for the audience. It's a brilliant number that's very satisfying to sing but it's also quite a simple moment. it isn't a dance number, there aren't glitter cannons or flashing lights; it's just you, the song, and the audience. And it's my favourite number to perform.

Any strange/memorable moments in the Aussie run of 'Kinky Boots' so far?
This is my first major musical so it's all been pretty strange and memorable. But the strangest moment for me, the one that made me go "how did I actually end up here?", was back in Melbourne during a vocal call with Cyndi Lauper. Callum – who plays Lola – and I were doing some work with her and we get to the end and she says "ok great, if you have any questions, just ask. You want my number?" And we both stood there in silence being like, "thanks for helping us today, we're a couple of now silent goofs". And she says, "get your phones out, I'll give you my number, you can text me if you need anything". And I just thought, "this whole thing is absolute bananas." Three years or so before that, I was ready to quit performing and then there I was in a room with Cyndi Lauper working on a massive show. But it only really sunk in when she told Cal and me to text her if we needed something.

What do you do to prepare before going on stage?
I like to get in an hour and a half early and do my make-up before warm-up so I can run around and pester everyone. Some people have strict rituals as performers, from tea or vocal steaming through to a song they might listen every night or some superstition they have but that isn't really for me. I like to get in, get ready and then go and visit people in other dressing rooms. I like being at work, I love the people I work with and I like to throw jokes around together or talk about facts and whatnot before the show. The closest I get to consistent prep is the group warm-up and playing a bit of chess on my phone while I put my mic on and get my hair done. I think I'm a bit of a giddy kid in that respect.