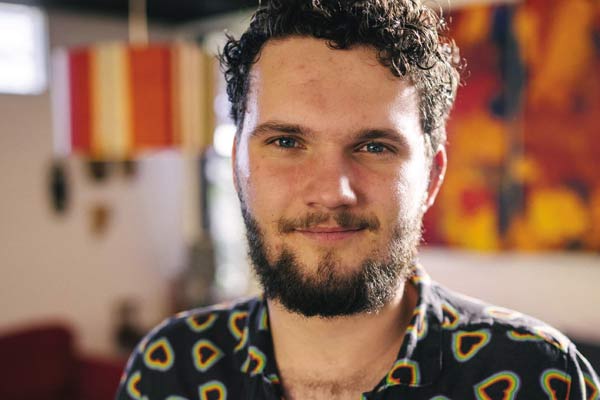 Sam I Am: Open Letter From Sam Martin About His Autobiographical Story

So, 2017 was an interesting year for Sam Martin.

Sam was 18, deaf, and trying to figure out how to come out during that crazy time in Australia where the country decided whether or not they were okay with same-sex marriage via a multiple choice postal vote.

'Sam I Am' wraps this experience into one autobiographical story of humour, honesty, and hope by a filmmaker who uses the stage to draw upon raw, coming-of-age moments to provide something of an insight into his life.

It's, of course, fully accessible and features Auslan interpreters and live captioning thanks to a GoFundMe which raised 100 per cent of its required funds in an hour.

Here, Sam Martin pens an open letter talking about the origins of the piece, and what it explores, before its in-progress showings in Sydney at the end of November.

“Director Dan Graham and I first connected over email nine months ago, 7 February to be exact. Not long after, he reached out to me asking if I was interested in collaborating with him to create a one-man show exploring and unpacking my identity as a gay/queer and hard-of-hearing/deaf man and the intersectionalities. From the very beginning, Dan was open about himself identifying as neuro-diverse and queer, and that fundamentally he saw a connection between our experiences – something that he recognised way earlier than I ever did.

Over a coffee Dan and I formed a friendship greater than a relationship between director and potential writer/performer. We were two people who never met before but both had a passion for the arts and storytelling, particularly the stories of queer, disabled people. Our conversations quickly turned into frustration over the lack of representation of authentic disabled queer voices in the arts within Australia. Despite our differences in our disability and life experiences, it was the broader commonalities of accepting identity, belonging, pride and passion that led us to creating 'Sam I Am'.

'Sam I Am' is a one-man show that explores the intersectionality of identities. It is a recollection and exploration of memories and experiences, looking back on the past and unpacking it with new insight and clarity. The stories are drawn upon my own, often very raw, coming-of-age moments such as coming out, being closeted during the marriage equality plebiscite, finding first love, my years of speech pathology and hearing devices, and ultimately finding confidence and pride in my identity. It’s my story, in my voice.

We live in an age where people no longer have to be individuals but can now find their people and community/ies. With the LGBTQIA+ community, some say that adding more letters is pointless and others may say we should focus on the umbrella term of 'queer'. However I believe that we naturally crave the ability to identify and label ourselves so we can justify and explain who we are. I know for myself personally, I’ve sought out validation. Coming out was a terrifying experience and despite being almost entirely sure that my parents would embrace and accept me, it was the 'what if' that made me sick in the stomach. The most validating experience was when I received a text from my grandpa. I didn’t know he had been told. With a family that is predominately female it was both heartwarming and hilarious to receive a text that welcomed the idea of my future male partner. As he said at the end of his text that day, 'after all old boy, we need more men in this family'.

I am neither an actor nor a performer and never have seen myself as being either, so my approach to this work has been far from conventional. Writing the script has been one of the most difficult challenges I have ever thrown myself into. When I actually started to write about myself I became stumped with trying to decide from an audience perspective what would be interesting.

All of a sudden, the thought of having people review the stories of my life, stories that I will curate and perform for them, is something that I have only managed to accept with the hope that there is a universal theme in the play that everyone can relate to: 'We are all born a blank canvas desperately curious to find out whom we are'.”