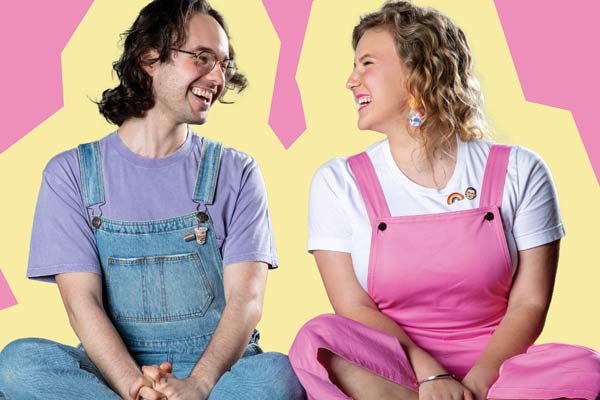 Millicent Sarre and Joshie Belle present an activist cabaret featuring original songs about contributing to causes and lending your voice – as well as being able to forgive yourself when you don't nail it.

Joshie is known for past award-winning Fringe shows such as '30,000 Notes' and 'Scarred For Life', as well as for penning sassy songs to the Prime Minister. Meanwhile, Millicent's cabaret 'Friendly Feminism For The Mild Mannered' has sold out multiple seasons and won awards too.

Together, this pair create a cabaret force to be reckoned with, and will present their show 'Awkward Activists' as part of Adelaide Fringe.

Here, Joshie Belle answers some questions about their recent experience with their own gender expression, as well as giving us an insight into 'Awkward Activists' and all it entails.

You recently announced your status as non-binary. How would you describe your gender in more detail?
I very much feel like there are multiple genders within me. A previous boyfriend of mine used to talk a lot about the divine feminine and the divine masculine, as if gender can be thought of as spirit energies that exist above and beyond human beings. I like to think that in the ways in which I think, speak, and behave, I embody both the divine feminine and the divine masculine.

Could you talk a bit about your journey towards coming into your gender identity?
I always remember hating putting on trousers, a button up shirt, and a tie every morning before going to school – but I just thought it was normal to dislike wearing a school uniform. I hated shopping for clothes, but I thought that was normal for men. Whenever I shopped with my most recent boyfriend, I would always gravitate towards women’s clothing without realising that I was doing so, and then as soon as he told me that the shirt I was holding was for women, I would drop it immediately.
As I started hanging out with more gender diverse queerfolk, however, I became less afraid to wear the ‘women’s’ clothing that I was always more interested in. And I noticed that the more femme I dressed, the happier I felt. There was this really formative moment when my friend and colleague, Millicent Sarre, asked if I’d like to try on her culottes. When I put them on it felt like this low-grade depression that was so constant that I didn’t even realise it was there, just melted off my shoulders. A lot of anger and agitation and feelings of inadequacy just evaporated that day. And since then, I have pretty much not stopped wearing culottes – including her pair, which we theoretically share but I am yet to give them back!

A post shared by You can call me Joshie 👋🏼 (@joshie_belle)

How do you express your gender in your everyday life?
My gender expression is fairly fluid. Sometimes I will want to wear culottes that billow so much that they look like a flowing colourful dress. At other times, I will want to wear pants that I bought from the women’s section. It depends on whether I feel like the divine masculine spirit energy is predominantly present in my body today, or the divine feminine is, or whether both are present in equal measure, or any combination that you can imagine. This feeling can subtly change from moment to moment, from one activity to the next, but there will generally be an overall feeling to the day that will inform what I wear.

How is the way you express your gender different when you’re in public versus when you’re in private?
This is the other part of deciding what to wear for the day: the question ‘do I feel safe where I am going in what I want to wear?’. Safety can mean a variety of things. There was one time when I wore silk culottes on the tram along with a crop top that said ‘end toxic masculinity,’ and a cis straight presenting older man turned to me as he was leaving the tram, and spat on me. Those kinds of overt experiences of queerphobia are more rare – the predominant ways in which I encounter queerphobia as someone who dresses to fill neither binary gender role are in dirty glares. If I want to wear my billowing culottes today, my euphoria will be tainted if I realise that I also have to buy groceries, because I will usually get at least three glares, and dozens of puzzled looks by the time I leave with my bread and soy milk. This kind of low-grade queerphobia is not too taxing for an hour or two, but if it’s every day, then over time it can really become exhausting. Often the sense of exhaustion that I’ll anticipate when I reach for my best culottes robs me of some of the joy in wearing them, and I’ll just put on the pants instead, or if I can stand it, maybe even my old shorts. 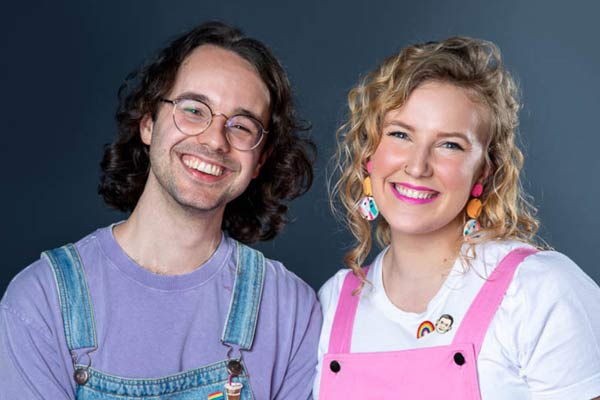 You will be presenting a new Adelaide Fringe show this year, 'Awkward Activists', in collaboration with Millicent Sarre. How will your non-binary identity factor into this work?
'Awkward Activists' is about the intersection of queer rights and feminism. It talks about the commonalities between those communities, as well as points in which they differ, and ultimately what we can learn from each other to advance social progress together. My non-binary identity will be a point of discussion, because I was able to realise this identity through embracing my femininity. This journey coincided with watching Millicent’s fantastic debut cabaret show, 'Friendly Feminism', after which I became more enlightened about feminist causes. In 'Awkward Activists', Millicent and I have a song called ‘Like A Girl’ in which we talk about our shared experiences of marginalisation because of our femininity, and the ways in which we tried to minimise that as children. We sing the following line in harmony: 'cause it made them treat me differently / no wonder I didn’t wanna be like a girl'.

How did the concept for 'Awkward Activists' come about?
It really came out of the conversations between Millicent and I. As co-songwriters and good friends, we have so many discussions about social justice and politics, and we had so many moments in which we said ‘wouldn’t it be funny if we wrote a song about gay white men who don’t give a sh.t about feminism?’ or ‘I want to reclaim the word ‘slut’ like the queer community (mostly) reclaimed the word ‘queer’ – I have a song in mind for that’. Before we knew it, we had a show.

What are you hoping audiences take away from the performances?
I think that, in a world in which people are lampooned on the internet for the smallest misstep, a lot of people who care about injustice are intimidated or daunted by the idea of being an activist. We feel like we have to know everything there is to know about a cause before we can raise our voice in support of it, or that if we buy single use plastic once then we can’t call ourselves a climate activist. Millicent and I want to make activism accessible and fun – by using catchy original songs! By the end of it all, we want our audiences to feel empowered that if they care about an issue of social justice, they can make a contribution, even if their contribution is imperfect and even if they might make a choice that is contradictory to the point of their activism. We all have to live in a world where, in order to make change, we are going to have to make peace with a certain level of contradiction, because we are living within a system whilst trying to change it. So we want our audiences to feel like that is okay, and as long as they get up and keep advocating for change, then that is what matters.

Do you have any small words of advice for a young person who might be struggling with their gender identity and isn't sure how to handle it?
The biggest help for me was in finding my queer family. I have a wonderful group of non-binary folk, including one person who I think of as like an older sibling. They really helped me to find my gender exploration fun, to tell me about their journey with it and what being non-binary means to them. So I would say to seek out such mentor-type figures. And remember that when you’re queer, you deserve to find a chosen family that will love and support you in ways that others simply are not equipped to. We have a wonderful tradition in this community of choosing our family, so there will always be individuals out there ready and willing to welcome you in.