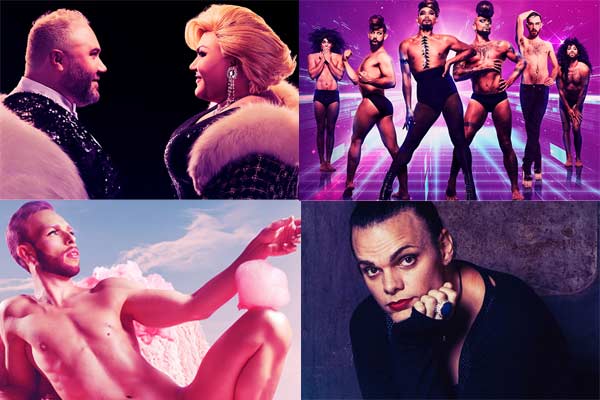 FROOT Of Brisbane Festival: Queer-Themed Acts Appearing At The Event

Check out a list of some of the shows appearing throughout this year's Brisbane Festival which have queer themes/artists involved.

'Briefs: Close Encounters'
Fresh from London’s West End, the boys are back in town with a dazzling new show, featuring their heart-stopping blend of cabaret burlesque, comic caper and circus to die for– all with punkish swagger. Expect interstellar aerial feats and warp-speed strippers from outer space as the 'Briefs' boys push the boundaries of artistry, masculinity and decency.
Dates: Wednesday 11-Sunday 15 September
Location: Playhouse, QPAC
Duration: 75 minutes

'Trevor Ashley Double D’s: Two Decades of Divadom'
He has been the body, voice and spirit behind some of Australian musical theatre and cabaret’s most vivid characters, refusing to be defined by gender, style, or the usual showbiz rules. But there is one role that Trevor Ashley doesn’t take on stage very often: himself. Accompanied by wunderkind James Simpson and an eight-piece band, ‘La TrAshley’ recounts some of his favourite moments of his career, with epic music, laugh-out-loud comedy, and a sequinned gown (or six).
Dates: Friday 13 September, 8pm
Location: Concert Hall, QPAC
Duration: Two hours, with interval

'Daddy'
Joel has daddy issues and his cravings for father figures leave him wanting more.
From the idyll of childhood reminiscence to the excesses of queer adulthood, Joel’s story proves that a sweet tooth is a dangerous thing. And like a kid in a candy store, an imperial hunger for Aboriginal Australia consumes all it encounters – land, women and children – like fistfuls of sugar. 'Daddy' is a sweet feast with a deadly aftertaste.
Dates: Tuesday 24-Saturday 28 September
Location: The Loft, Theatre Republic
Duration: 75 minutes

'Cassie Workman: Giantess'
After being abducted by a troll, a girl must realise her destiny – and escape. What lies beyond his kingdom is a mystery, so she will need the strength of a giantess.
Created by the multi-award-winning comedian Cassie Workman, 'Giantess' is a story of self-acceptance. Interweaving music, comedy, storytelling, and illustration, Cassie’s one-person show explores the anguish of coming to terms with a gender identity that doesn’t match your body.
Dates: Tuesday 24-Saturday 28 September
Location: La Boite Studio, Theatre Republic
Duration: 60 minutes

To check out more of Brisbane Festival's queer offering and the rest of their programme, click here.