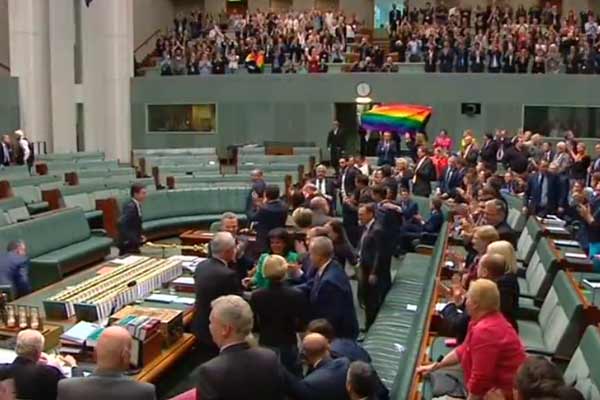 New figures released by the Australian Bureau of Statistics (ABS) on 27 November show that more than 6,500 same-sex couples married in 2018.

This makes up 5.5 per cent of all Australian marriages.

just.equal advocacy group spokesperson Rodney Croome says it's a reminder of how important the law passing was to the queer community in Australia.

"The ABS statistics are a reminder of the large number of LGBTQIA+ Australians and our families for whom marriage and equality are important, and for whom the reform has had a profound and positive impact," he says.

"These figures should also be a reminder that marriage equality was never an ideological crusade, but a heartfelt aspiration for equal dignity and belonging that was widely shared by LGBTQIA+ people and our families."

The statistics, however, didn't include marriages where partners identified as something other than male/female.

Other interesting things to come from these new statistics include:
- There are more female than male married same-sex couples (57.2 per cent to 42.2 per cent)
- 98.9 per cent of same-sex marriages were solemnised by civil celebrants, with most religious same-sex marriages being officiated in the Uniting Church.
- The median age of married same-sex partners was significantly higher than for opposite-sex partners