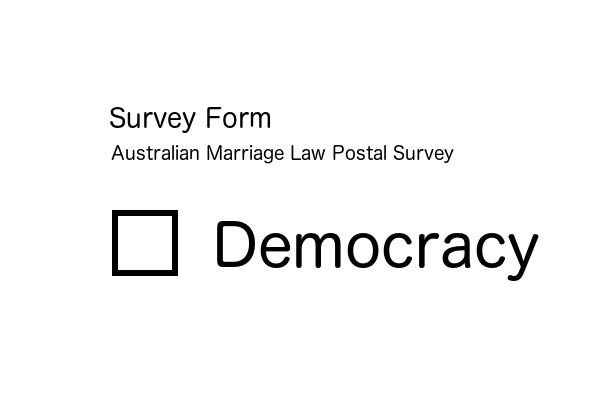 Rachel Vickary is angry as hell. You have no idea how angry she is.

Although not shouty by nature, Ms Vickary took to social media yesterday for a very big shout which covered personal sadness at the delay in SSM, first-hand experience of gay parenting but in particlar some 'Yes' advocates who are fouling the vote – and steamrolling democracy in the process.

She's firmly of the opinion that no matter how we as a country arrived at this "clusterfuck" of a plebiscite, we arrived at it by dint of democracy and while she may hate their ['No' voters] opinion ... in a democratic society they have a right to voice it.

And she's not alone.

Joe Hildebrand – social commentator and 'Yes' advocate – this week wrote positing many national issues over the years have involved matters of life and death – all of which also cause distress.

Yet in 2017 the manic 'Yes' campaigners losing their proverbial with a massive dose of moral justifaction are off the mark, neither helping their cause nor covering themselves in glory (as democratically endowed adults).

"For anyone out there who bullies, hurts, harms, attacks or abuses anyone in the name of marriage equality, please know this... you do NOT speak for me.

"[Bullies] you do NOT speak for me"

The vitriol and viciousness on BOTH sides of the debate needs to stop. There are so many reasons to be pissed that we don't have marriage equality. I feel angry, betrayed and frankly let down by the whole thing, but to abuse someone simply because they feel differently is disgusting, ignorant and intolerant and I want no part of it.

No matter how strongly we feel, and believe me, marriage inequality makes me angry for a whole host of reasons, let's just behave with integrity and dignity.

I'm angry as hell that my beautiful, amazing and supportive mum didn't live to see Jules and I get legally married after 14 years together because our government has spent the last several years pissing about on the issue.

I'm angry and saddened by the fact that no matter that we are good humans who obey the law, pay our fair share of taxes, support ourselves, give back to the community and are generally just decent, kind and hard-working members of society, yet we are not afforded the same recognition. Which to many of us looks like we're just not quite as good as a straight person.

I'm angry that some feel that while there should be marriage equality, we shouldn't use the word ‘marriage’ because it should be reserved for man+woman. So we can be 'equal' and have legal marriages but as long as we realise that we're still just a bit 'less than' a heterosexual marriage?

I'm beyond angry when it comes to the argument about how the children of gay parents must suffer and how children need a mother and a father. This is just ludicrous, as anyone who's ever met our incredible and inspiring son can attest. And if you don't believe me, why not ask him? These two gay parents raised the kindest, most thoroughly decent, amazing son.

"I'm beyond angry when it comes to ... arguments about ... the children of gay parents"

We scrimped, saved and sacrificed for years to ensure he had the best private education and every opportunity possible. We raised him in a house filled with love and laughter and he's grown up to be an amazing human.

So yes, I'm angry about the same sex marriage debate and yes I'm frustrated by the tired, old and illogical reasons why much of our government and some members of our society don't think we deserve equality...

BUT
Head butting a politician while wearing a YES badge, abusing people who have a different view or just generally acting with hatred will fix nothing!  FFS, the amount of people who really didn't care, or who would have voted yes, is beginning to turn.

"The amount of people who really didn't care, or who would have voted yes, is beginning to turn"

At the start of this whole hot mess, around 70% of Australia would have voted yes. Now we're down somewhere in the 50% range. Not because of the actual issue, but because of the behaviour that it seems to be creating on both sides.

Don't be angry at the no voters - try talking to them. I may hate their opinion and reasoning on why same-sex marriage shouldn't be recognised but in a democratic society they have a right to their opinion just as I do.

We'll get a hell of a lot further by talking and really demonstrating that same-sex families are exactly the same, and just as deserving of equality, as heterosexual ones.

A plebiscite or a postal vote was always going to be a clusterfuck of epic proportions, and the politicians who didn't want to pass the laws on this must be rubbing their hands together with absolute glee since it's devolved into an ugly public slanging match and taken the heat off them, but for god's sake, let's be better than that and rise above.

Let's not lose sight of the real issue - that love is love and that everyone should be treated with equality, kindness and dignity even as we put up with a voting process that is, by its very existence, unkind, unfair and totally undignified for everyone.

We all deserve better.

The result of the national plebscite will be announced by 15 November.